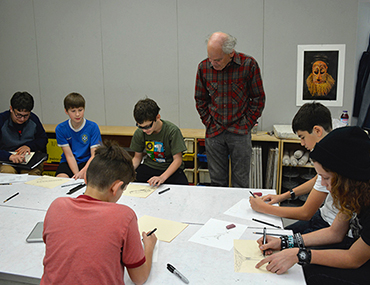 David Suter, a multi-media artist renowned for his op-ed illustrations known as “Suterisms,” visited the 12/13s in November to introduce them to the power of editorial illustration. He shared examples from his prolific body of work, which has been published in major newspapers and magazines, including The New York Times, The Washington Post, Chicago Tribune, Harper’s Magazine and Time Magazine.

Mr. Suter demonstrated the difference between political cartoons and op-ed illustrations and also showed and described the history of publishing and printing, how the techniques have changed drastically over time, which also highlighted the history of technology. The students also shared with him their interpretations of his work, which he found illuminating!  Following the conversation, the students, motivated by his talk and by his art, were given time to create their own illustrations or cartoons about issues that matter deeply to them. During this time, Mr. Suter spent time talking with them individually about their ideas and questions. It was an eye-opening experience for the students to see that this way of drawing is a form of journalism, and is a way for them to share their views with the world.