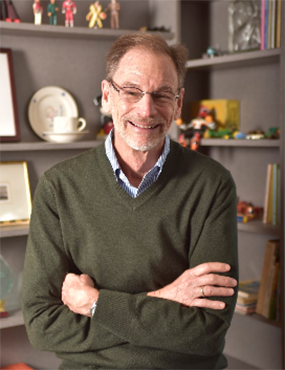 Just as he steps down as Bank Street’s longtime editor-in-chief of the Bank Street Occasional Paper Series, Jonathan Silin, GSE ’71, has written a new book, Early Childhood, Aging, and the Life Cycle: Mapping Common Ground, which was published by Palgrave Macmillan in early 2018.

The book sets out a theoretical groundwork for understanding aging as it relates to progressive educational theory and socially relevant curricula. Drawing stories from his life as an early childhood teacher, a graduate teacher at Bank Street, and editor-in-chief of Bank Street’s Occasional Paper Series, Silin re-imagines the trajectory of the human lifespan from early childhood to “young-old age,” a reference to 60-to 80-year-olds and the current baby boomer generation.

Rather than focusing on the developmental differences traditionally used to distinguish between psychological characteristics of young and old, Silin maps the common themes and continuities that begin in early childhood and weave their way throughout our lives. The author challenges us to look anew at the shape of our lives across time. We sat down with Silin to discuss the book and his work as an educator.

Q: What was the inspiration behind this new project?

A: My writing comes out of my life. One of the things that motivated me to write this book was my dissatisfaction with the models of aging that were available to me. As someone in my 70s, I’m reflecting on what it meant to become a teacher of young children in my 20s. I was thinking about connections between those two periods of my own life to see if there were larger questions for children and adults. What I realized is that the same issues keep re-emerging across my lifetime—and that’s not necessarily a bad thing.
Q: In your book, you map the continuities that bind children and adults rather than focusing on differences. Why was this approach important?

A: Many of the “young-old” become reflective about where they’ve been and how they want to use their remaining time. It points to something children and older people share—a need to live in the present. What researchers have found out about the group we call the “old-old”—those who are 80-plus—is that those who are living well and satisfied with their lives are very much present-oriented. Children live in the present, too.

Young children also experience a tension between wanting to be independent and living in a natural state of dependency on adults. Later, this tension re-emerges when we are faced with caring for our aging parents, and then we again face the same question for ourselves: How can we remain independent when we are growing more dependent on others for assistance? Maggie Kuhn, who founded the Gray Panthers, talked about interdependence. Really, we are interdependent: Our entire lives are connected in a web of relationships with others, even if adults sometimes don’t want to see or think about that. Mapping the continuities highlights this concept.

Q: How does this idea of interdependence surface in the classroom?

A: I’ve always been a strong advocate for socially relevant curricula that reflect children’s lived experiences. A couple of years ago I was in Australia visiting a small school in a rather isolated spot. They had experienced 10 years of extreme weather—houses were destroyed by flooding, forest fires had endangered towns, and people had lost lives. When I spoke with teachers, I found out that their first response was to ignore the devastation around them while in the classroom. They believed they were providing a safe haven from the difficulties. We talked and they began to see that they were missing an opportunity for the children to learn about their interdependence with their families and the world around them. How did the community respond to this severe weather crisis? How did the school prepare itself? How did families take care of themselves?

We need to seize those moments and not be quite so afraid of them. In addressing adversity and in trying to unpack what’s actually happening, I think there’s a tendency for adults to want to make things better for children. Most of the time, we can’t really do that. What we can do, however, is provide the tools for children to tell their own stories with words, blocks, and art materials. We can bear witness to their stories. When children talk about difficult experiences with us, we can be in the moment with them, but we can’t promise to fix the world. This is true when we care for and truly care about people of any age.