Annual BookFest @ Bank Street Welcomes the Children’s Literature Community - Bank Street College of Education Skip to content
Important Message
Bank Street College has closed its building and all programming through June. Please note that while our building is closed, we are still open for business online and staff are working remotely. Further updates will be posted here and communicated to our community.
Alert
Headlines 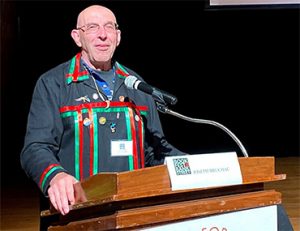 On Saturday, October 19, authors, illustrators, librarians, and other children’s literature professionals gathered at Bank Street College for the 10th annual BookFest, an event hosted by the Center for Children’s Literature to celebrate, discover, and inspire thought-provoking discussions on books for children and teens.

This year, the sounds of a Native American flute filled the auditorium as keynote speaker Joseph Bruchac, author of Two Roads, opened the program. Bruchac, whose work focuses on creating literature and music that reflects his indigenous heritage, took a moment to recognize the Native land of Manhattan and the Lenape people who originally inhabited the area through a land acknowledgment statement.

“We look forward to hosting BookFest each year and bringing the community together to engage in impactful conversations and connect with each other through children’s literature,” said Cynthia Weill, Director, Center for Children’s Literature. “Today, research shows that children’s books by or about Native Americans remain underrepresented in publishing and one of Bank Street’s objectives this year was to call attention to this issue while highlighting work by Native authors and illustrators.”

After opening remarks, the first panel, “Illustrating Margaret Wise Brown,” prompted a discussion on the literary luminary’s approach to writing children’s books. The presentation featured a group with connections to the Goodnight Moon author and her work, including Sarah Jacoby, illustrator of The Important Thing About Margaret Wise Brown; Greg Pizzoli, illustrator of Brown’s North, South, East, West; Jerry Pinkney, illustrator of Brown’s A Home in the Barn; and Lisa Von Drasek, Curator of the Children’s Literature Research Collection at the University of Minnesota, former Bank Street Children’s Librarian, and founder of the Center for Children’s Literature.

“One of Margaret Wise Brown’s central insights here is that writing for kids is like any other good piece of writing—it tells the truth about what it means to be a person in the world,” said Barnett, who first read the essay while researching his and Jacoby’s picture book biography on Brown. “But she recognizes that being a child is different from being an adult, that children and adults have different truths, and that we need to respect our audience, understand their lives, and speak directly to them—to talk to children as they are and not as adults want them to be.” 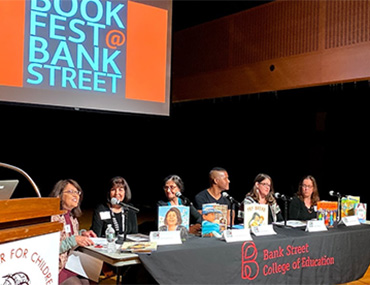 Next, Loriene Roy, Professor in the School of Information at the University of Texas at Austin, moderated the “Native Voices in Our Time” panel featuring Yvonne Wakim Dennis, author of Children of Native America Today; Linda Kukuk, illustrator of Wilma’s Way Home: The Life of Wilma Mankiller; Kevin Noble Maillard, author of Fry Bread: A Native American Family Story; Cynthia Leitich Smith, author of Hearts Unbroken; and Traci Sorell, author of We Are Grateful: Otsaliheliga. During this discussion, each panelist shared their published books and spoke about Native representation and diversity in children’s literature.

Mary Burkey, author of Audiobooks for Youth: A Practical Guide to Sound Literature, then took the stage to share a presentation titled, “Listening to Literature: The Power of Audiobooks.” In her lecture, Burkey spoke on “publishing’s fastest growing format” and discussed how audiobooks help to enhance children’s literacy skills by building listening stamina as well as comprehension.

“Part of what comics do is teach kids how to read images, which is a really vital skill in a world where we are being bombarded with images all of the time—more and more with the internet—and that kind of visual literacy seems to me crucial and equally necessary as literacy,” said Speigelman in response to a question on how comic books are often viewed as a stepping stone to “real” literature.

Bruchac concluded the day with a captivating keynote in which he played the song “Wayfairing Stranger” on the Native American flute, discussed the “love-hate relationship” between Native and American culture, and shared a meaningful lesson he once learned from a Mohegan elder: to listen, observe, remember, and share.

“For when you share, someone else listens, someone else observes, someone else remembers, and they one day become the one who shares themselves. This is your job as writers, teachers, parents, grandparents, and human beings,” said Bruchac. “Today, we are in a situation where we as human beings, as always, need to listen to one another. We need to hear each other’s stories. Literature has always been a way of sharing the depth of the heart,” he added, while referencing the traditional Lakota saying.

To view the full livestream of the event, click here