For nearly two decades, Susan Ochshorn has worked at the local, state, and national levels to integrate early childhood research, policy, and practice into the larger education reform conversation. Her new book, Squandering America’s Future: Why ECE Policy Matters for Equality, Our Economy, and Our Children (Teachers College Press), explores the most significant issues in contemporary early childhood policy and offers a peek into the ideas that have shaped her work. 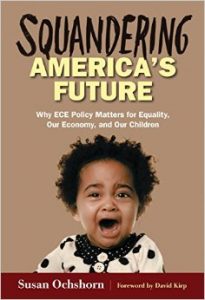 The event, Leaders at the Conference Table, will celebrate Susan’s new book and open up an energetic discussion about professional identity, development, and leadership. Written in a lively, personal style, her book encourages early childhood practitioners to raise their voices at the policy tables. Otherwise, as she writes in the book’s prologue, “those who know little about children and are woefully, inadequate to the task, end up making big decisions with dangerous repercussions.”

“My Bank Street education provided me with the gold standard for early development and education, keeping me rooted, always, in what’s best for the child and the family,” Susan said.

Following her graduation from Bank Street, Susan’s “baptism by fire” was managing Partnering for Success, a project that documented 68 partnerships between early childhood programs––Head Start, child care, state preschool, Parents as Teachers––and public school districts. She has led Educational Seminars with the United Way of Tucson and Southern Arizona, which focused on ecological strategies for systems change, with the child at the center. In 2012, she conceived Building a Competitive Future Right from the Start, a forum hosted by the National Center for Children in Poverty, where more than 100 professionals gathered to share research on the impact of paid family leave on early childhood development and family health. They also generated strategies for winning paid family leave in New York and throughout the country.

Bank Street marked Susan’s career shift away from magazine journalism and into early childhood social policy and advocacy. However, she still utilizes her writing skills to raise awareness in these arenas. Shortly after founding her own consulting firm, ECE PolicyWorks, she created a virtual soapbox at the Huffington Post to weigh in on issues of early childhood policy. Simultaneously, she began her own blog, ECE Policy Matters.

“It’s read by tens of thousands of early childhood professionals, policy makers, parent and teacher activists,” Susan said. “It has become the go-to place for honest and impassioned discussion about the critical issues for children and families today.”

Susan’s book offers perspective gained from her extensive experience in the policy arena as well as sources culled from research across many disciplines. Her arguments provide insight into early childhood education as an urgent matter of social justice.

“The best interests of the child are under siege,” Susan said. “The U.S. has been cited by Human Rights Watch for failure to support its families. Early childhood professionals and the important work of caregivers and educators continue to be marginalized and devalued.”

But Susan remains hopeful for the future. While traveling across the country for her book, she was tremendously inspired by the new voices emerging in many communities, and hopes they will offer leverage and have a positive impact.

“The defenders of children are growing more vociferous, including parents, whose activism is at an all-time high,” Susan said. “And I’m cheering them on with every fiber of my being. It’s exciting to think about pushing upward––and downward, to infants and toddlers, and effecting change in the K-12 system.”