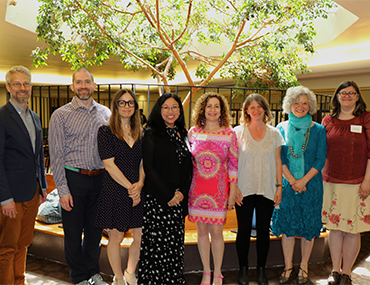 On May 16, the Bank Street Center for Children’s Literature hosted its awards ceremony to celebrate the 47th Annual Irma Black Awards and 8th Annual Cook Prize.

Presented each year since 1973, the Irma S. and James H. Black Award for Excellence in Children’s Literature recognizes outstanding books for young children in which the text and illustrations are wholly connected, each enhancing the other to strengthen the content on every page and create a harmonized piece. The award, which is voted on by students in grades 3 and 4 at the Bank Street School for Children, honors Irma Simonton Black, longtime member of the Bank Street Writers Lab and writer and editor of children’s books. She was also an author and editor of many cutting edge academic works, including The Bank Street Readers, the first multicultural, multi-ethnic readers.

“The Children’s Literature Committee reviews hundreds of books each year and the award juries help to narrow down this list,” said Weill. “Both the Irma Black Award and Cook Prize are unique in their selection process because the winning titles are ultimately decided by children. We hope these awards will help educators continue to identify high-quality literature for their students and inspire children to find joy in reading and discussing books with each other.”

To begin, Brian Floca, author/illustrator of the 2014 Caldecott Medal winning picture book, Moonshot: The Flight of Apollo 11, presented the keynote about his writing and revision process for the book, which was published as a new expanded version earlier this year in honor of the 50th anniversary of the first moon landing.

“Limits are what help us set schedules, set priorities, and make decisions. The more you love your subject, the more you feel those limits, the more you probably need them. From limits come the shape of stories,” Floca said as he reflected on the making of the original edition of Moonshot. “The book is done—for at least another 10 years.”

The winning title, We Don’t Eat Our Classmates, written and illustrated by Ryan T. Higgins, was celebrated next. In this humorous first-day-of-school story, Penelope, a dinosaur who wears pink overalls, is surprised to learn that her new classmates are tasty humans, so she eats them until her teacher instructs her to spit them out.

“A lot of thought goes into making my books. Mostly, those thoughts have to do with how and not an awful lot to do with why,” said Higgins as he spoke about how the meaning of the story often surfaces later in his process. “We Don’t Eat Our Classmates, I am told, is about learning to treat others the way that you want to be treated.”

Following Higgins’ remarks, the Cook Prize for Excellence in Science, Technology, Engineering, and Math (STEM) was awarded to this year’s honorees. Named after two notable Bank Street educators, Don Cook and Michael Cook, the Prize recognizes excellent informational books on STEM topics for elementary-age children and is voted on by students in grades 3 and 4 across the globe. 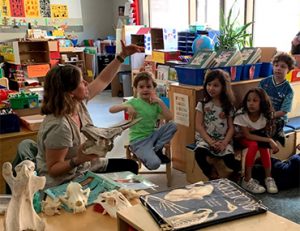 To conclude the ceremony, Counting on Katherine, written by Helaine Becker, illustrated by Dow Phumiruk, was honored as the winner of the Cook Prize. This picture-book biography tells the story of prominent NASA research mathematician Katherine Johnson.

While writing a different book about space, Becker and her son, who was helping her research, discovered Katherine Johnson and her many groundbreaking contributions to NASA. At the time, very little information about Johnson had been written.

“Why did we not know anything about Katherine Johnson?” Becker said. “This brings us back to why we are all here and what is so important about literacy and about reading and writing … when you have literacy and the ability to write, that means you get to tell your own story.”

Phumiruk took to the podium next to share photos from her illustration process as well as an encouraging message. 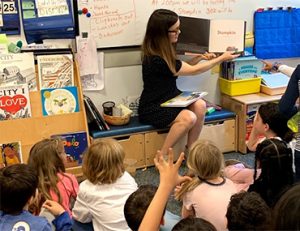 “To all who read Counting on Katherine, I hope you are inspired by this trailblazing and incredible woman,” Phumiruk said. “Perhaps you too will reach far, and high, and wide to make contributions to society to help people beyond their dreams.”

Following the ceremony, attendees gathered in the lobby for book signings. The School for Children also enjoyed classroom visits from the authors later in the day.

To read more about the Center for Children’s Literature and the awards, click here

To view the KidLit TV video of the ceremony, click here