This year, David Bowles, who was awarded Bank Street’s 2019 Claudia Lewis Award for They Call Me Güero: A Border Kid’s Poems, delivered the keynote presentation titled “Literary Dignity: Centering Latinx Kids in Books and Board Rooms.” Bowles discussed issues of equity and representation in children’s literature, noting that less than 8 percent of approximately 3,500 children’s books published each year are written by authors from communities of color and 25 percent of the 3,500 titles feature protagonists from communities of color.

“Black, Indigenous, and other kids of color need to see their lives, their families, their communities, and their culture as cool, important, integrally human, worthy of academic study—and this is something that’s really important for the teachers in the audience to think about—as valuable and integral parts of not just personal and school life…they need to see their lives also as part of school work, shared public life, and broader national conversations,” said Bowles.

Additionally, Bowles reflected on several popular movements within the children’s literature space, such as the #OwnVoices movement, which, he explained, can become polarizing when viewed under the expectation that diverse books must represent an entire community of people. He also shared his thoughts and support for the #DignidadLiteraria activist movement that seeks greater Latinx representation in the predominantly White publishing industry. Co-founder of the #DignidadLiteraria campaign, Bowles encouraged teachers and librarians to advocate for “a healthy sense of equity and literary dignity” in their own school districts and communities, such as in the books that are included in the curriculum and library collections.

The first panel titled “Whole Neighborhoods Inside Us: Community and Belonging in Picture Books by Mexican American Authors” was moderated by Alexandra Aceves, Editor, Junior Library Guild. During the discussion, panelists Matt de la Peña, author, Carmela Full of Wishes; Yuyi Morales, author and illustrator, Dreamers; Donna Barba Higuera, author, El Cucuy is Scared Too!; and Isabel Quintero, author, My Papi Has a Motorcycle explored ideas around Mexican American identity, the pan-Latinx community, and how this has shaped their work.

“Although we always look for the similarities in order to find our strengths, it makes me wonder what happens when we actually look at the differences, but then we don’t see those differences as something that we have to defend against but something that we are curious about and something that we celebrate,” said Morales as she spoke about the different ways individuals experience identity. “I know that even as I experiment and I go outside of my comfort zone, everything that I am is always going to show in my books.” 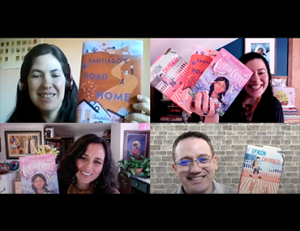 To begin, España asked the authors to share a current source of healing, such as a practice, song, or memory. Next, the authors explained the inspiration for their stories, all of which draw from the United States immigration system and children’s experiences with raids, deportation, detention centers, and family separation.

“I wanted to write something that would help [my students] to navigate what’s going on in their lives, to empower them, to give them hope and just let them know that they’re not alone,” said Cisneros, who teaches in Santa Ana, California, as he reflected on a time when the parents of some of his students were deported.

“The conversations from today were incredibly moving and very informative,” said Cynthia Weill, Director, Center for Children’s Literature. “We appreciate all who were able to join us in our virtual setting this year and we thank the authors and moderators for leading such important, timely discussions on Latinx children’s literature.”

To view recordings of the keynote presentation and panel discussions, visit the Latinx Mini-Conference webpage. To purchase titles in English and Spanish from the mini-conference, visit our virtual bookstore.