On April 5th, the Children’s Book Committee at Bank Street hosted its annual awards ceremony to celebrate the winners of the Josette Frank Award, the Flora Stieglitz Straus Award, and the Claudia Lewis Award. Presented each year by the Bank Street Center for Children’s Literature, the three awards recognize outstanding books for children in the genres of fiction, nonfiction, and poetry, respectively.

The ceremony, which is a cherished event within the children’s literature community, follows the annual release of The Best Children’s Books of the Year list, which is developed as a result of an intensive review process led by the Children’s Book Committee. After each book is read and approved, committee members nominate specific titles for the three awards. Comments made by “young reviewers” are shared and discussed among the committee members before final voting. 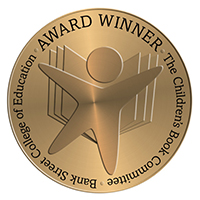 “The Children’s Book Committee Awards have become very prestigious within the literary community,” said Cindy Weill, Director of the Center for Children’s Literature at Bank Street College. “At this year’s ceremony, we were delighted to unveil our new medallion, which publishers will be able to print on their book covers of winning titles. Created by longtime Bank Street staff member Joan Sinclair, the original logo was turned into a beautiful medal by Laurent Linn, Committee Member At-Large, which we will proudly award to our winners for decades to come.”

This year’s honorees included Piecing Me Together by Renee Watson for the Josette Frank Award; Hawk Mother: The Story of a Red-Tailed Hawk Who Hatched Chickens by Kara Hagedorn for the Flora Stieglitz Straus Award; and One Last Word: Wisdom from the Harlem Renaissance by Nikki Grimes for the Claudia Lewis Award. During the ceremony, each winner formally accepted her award—either in person or via video recording for those who could not attend—and discussed what inspired her work.

First to receive her honor was zoologist Kara Hagedorn, for the Flora Stieglitz Straus Award. Her nonfiction book, Hawk Mother: The Story of a Red-Tailed Hawk Who Hatched Chickens, tells the moving true story of Hagedorn’s experience caring for a wounded, infertile red-tailed hawk and how she helped the raptor satisfy her maternal instincts by placing chicken eggs in her nest to hatch. The work contains emotionally evocative full-page photographs that complement Hagedorn’s graceful storytelling and sends the message to young readers that they can overcome challenges with the help of others who care for them.

At the start of the ceremony, the audience had the opportunity to watch a video recording of Hagedorn that included live footage of the red-tailed hawk, Sunshine, and further insight into the powerful, touching story that inspired her work. After the clip, which ended with an acceptance speech from Hagedorn, publisher Madeleine Dunphy took the stage to formally accept the honor on Hagedorn’s behalf.

Next was the presentation of the Claudia Lewis Award, which recognized award-winning author and poet Nikki Grimes for One Last Word: Wisdom from the Harlem Renaissance, a collection of fresh contemporary poems to be read alongside classic works from premier artists of the Harlem Renaissance. Grimes accepted her award via video and shared a meaningful excerpt from “The Sculptor,” one of her own original poems from the book:

“No accident or birth or race or place determines the scope of hope or dreams I have a right to. I inventory my head and heart to weigh and measure what talents I might use to make my own tomorrow. It all depends on the grit at my disposal. My father says hard work is the clay dreams are molded from. Yes. Molded. Dreams do not come. They are carved, muscled into something solid, something true,” she read.

The ceremony culminated in the bestowal of the Josette Frank Award to Renee Watson for Piecing Me Together, which follows the journey of young Jade when she is nominated by her predominantly white private high school to join a mentoring program for black girls. Bank Street recognized Watson’s work for its ability to help young people deal in a positive way with the challenges in their world and grow both emotionally and morally. Watson gracefully accepted her award with a beautiful poem about the cultural experiences that formed the backbone of her childhood and adolescence and how they inspire her as a writer. 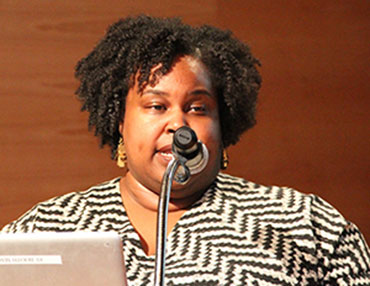 “I write with the hope that after reading my books, young people and the adults in their lives can talk about and process what is happening in the world we live in,” she said. “I hope young people find ways big and small to fight against injustice. I hope they are relating to the characters and their flaws, who are finding their way and growing into their voice, their talent, their activism. …This is why it is such an honor to be recognized by Bank Street, a place dedicated to educating our future, a place that believes education is an opportunity to build a better society.”

Watson is also this year’s Dorothy A. Carter Writer-in-Residence, a program at Bank Street established in 2015 that invites a prominent author each spring to work with School for Children students on their creative writing skills. Watson, who received the 2017 Coretta Scott King Award and a Newbery Honor for Piecing Me Together, will work on poetry with 9/10s classes this spring.

For more information and to access videos of opening remarks and acceptance speeches at this year’s ceremony, click here.