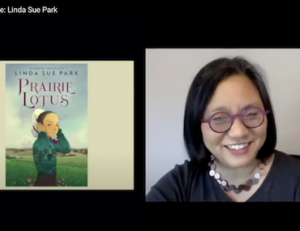 On October 17, members of the children’s literature community from across the country tuned in to BookFest @ Bank Street, an annual event hosted by the Center for Children’s Literature for authors, illustrators, educators, and publishers to celebrate books and discuss important topics in literature for children and teens.

This year, Linda Sue Park, Newbery Medalist for A Single Shard and New York Times bestselling author of A Long Walk to Water, delivered the keynote presentation, which focused on her latest work, a middle-grade historical fiction novel titled Prairie Lotus. In her keynote, Park explored how history often tells an incomplete, “single story”—a reference to Chimamanda Ngozi Adichie’s TED Talk, “The Danger of a Single Story”—and shared why she set out to provide a fresh perspective of the late 19th-century American frontier in Prairie Lotus.

“Whenever I write historical fiction, I think about the history that we get especially as children in schools, the history that we get through our education systems. You think about these big events in history, like westward expansion, like any event that has come down to us in history, and the question I’m always interested in is, ‘Who else was there?’” said Park. “That’s when you start to get the different lenses and different perspectives on history. That’s when you begin to dismantle the single story.”

Set in the Dakota Territory, Prairie Lotus features a half Asian and half White teenage girl, Hanna, who moves to a small settler town where she experiences prejudice from the townspeople. Through this lens, Park is able to present a broader view of the American West and tell a story typically not included in social studies textbooks.

The novel draws from Park’s own childhood experience reading Laura Ingalls Wilder’s Little House on the Prairie series. As the daughter of Korean immigrants, Park shared how meaningful the books were to her in that they “seemed to show us what it meant to be an American,” but as an adult she realized that the stories had significant problems. Park explained that she would often imagine herself as a best friend of the main character, Laura, but later understood that the prejudices of Laura’s mother against Native Americans would have prevented Park from ever being her friend.

“It’s messy and complicated and difficult to teach history from more than one perspective and because of that, history textbooks do lean on single stories. That means that it’s up to individual educators to provide that variety of lenses outside of the textbook for their students,” said Park. “We have to educate them on the whole truth to give them the knowledge and tools that they will need to help to solve these problems in the future.” 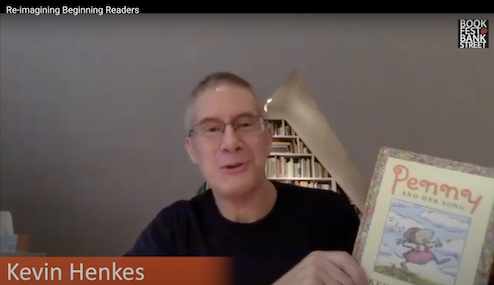 “Through the collaborative efforts of Bank Street, our Center for Children’s Literature, and the broader children’s literature community, we were able to host a truly successful BookFest event this year,” said Cynthia Weill, Director, Center for Children’s Literature. “Although the virtual format is not the same as gathering together in person, it provided an opportunity for those from near and far to join us, including authors from the West Coast and Asia who might otherwise not have been able to travel to New York for the day. We are grateful for everyone’s participation in these important conversations and look forward to celebrating children’s books again next year.”

The virtual format also created a heightened sense of connection as panelists joined from their studios and living rooms with multiple pets making appearances as drop-in visitors.

To watch recorded videos from the event and learn more, visit our BookFest @ Bank Street page.