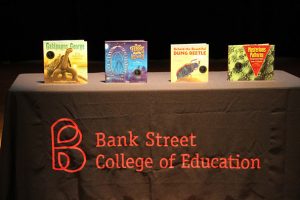 On May 14, Bank Street hosted an event to honor the finalists of the 42nd annual Irma Black Award and those of the 4th annual Cook Prize.

The Irma Simonton and James H. Black Award recognize outstanding children’s books by specifically evaluating the way the words and pictures work together to enhance each other and create a unique experience for kids. Irma Black, longtime leader and member of the Bank Street Writers Lab, especially admired this idea. The award honors her legacy and is unique in that children are the final judges of the winning book.

“My mother loved children,” said Connie Black Engle, daughter of Irma Black. “She was much more comfortable in the company of little kids than she was with adults.”

To kick off the event, Bank Street welcomed keynote speaker Fiona Robinson, winner of the 2012 Irma Black Award for her book, What Animals Really Like, which delivers subtle messages to children about stereotypes by contradicting the preconceived notions of different animals.

“I’m drawn to create characters who rebel against the role they are given,” she said.

Following Robinson’s presentation, Bank Street’s Allie Bruce and Mollie Welsh Kruger took the stage to introduce the Irma Black nominees. The finalists included Blizzard by John Rocco; Elizabeth, Queen of the Seas by Lynne Cox, illustrated by Brian Floca (who also designed the Cook Prize seal); Shh! We Have a Plan by Chris Haughton; and the 2015 Irma Black Award winner, Sam, and Dave Dig a Hole by Mac Barnett, illustrated by Jon Klassen.

The winning book, Sam and Dave Dig a Hole, tells the story of two boys and their dog who dig in search of something spectacular, but in the end, something spectacular finds them. Many theories have been tossed around in regards to the story’s ending, but illustrator Jon Klassen pointed out that children fill the blanks of any story in their own ways.

“This book reminded me how lucky we are that an audience of kids is the last and most interesting ingredient you know your book is going to have,” he said. As Klassen was unable to attend, author Mac Barnett delivered his remarks. Barnett, for his part, said that “any piece of art is a conversation with the reader. We worried that people would think our book was ‘not kid-friendly,’ which really means ‘not adult-friendly.” Barnett added, “We knew our ending would give pleasure in its ambiguity, mystery, and not knowing.” He also enjoyed that readers were often the ones to explain the ending for adults.

The ceremony then transitioned into recognition of the finalists for the Cook Prize, which honors picture books that represent the best in science, technology, engineering, and mathematics (STEM) principles. The award honors Michael Cook of the School for Children and Don Cook of the Graduate School in their intangible contributions to the world of education.

Each story is beautifully different in its translation of different STEM elements into language and illustrations that children can comprehend. In Mysterious Patterns: Finding Fractals in Nature, Sarah C. Campbell took the complex topic of fractals, which is often studied at the college level, and broke it down for kids by starting out with something familiar.

“What opened the door for me is that fractals are really just shapes,” Sarah said. “Everything in nature is composed of cones, cylinders, and spheres. We teach kids about those shapes in elementary school.”

In the 2015 Cook Prize-winning book Galápagos George, Jean Craighead George weaves facts about nature into a story that reverts back one million years, when giant tortoises migrated to the Galápagos Islands and slowly evolved into different subspecies. George, who passed away in 2012, wrote over 120 books for children and was “very connected with teaching them about endangered species, about the world, and about wildlife.” 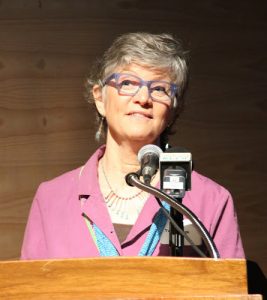 Twig George accepted the 4th annual Cook Prize on her mother’s behalf. She addressed Jean George’s sense of story and her way of bringing kids into nature.