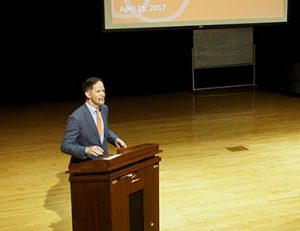 During his talk, Lippard shared insights on progressive education, highlighted special moments from the 2016-17 school year, and announced updates on staffing and new initiatives to a full house of guests.

Lippard began his speech with a look at several key pillars of progressive education. “The first pillar, probably the most important, is that the child is at the center,” Lippard noted, outlining the difference between teachers who simply dispense knowledge for children to receive and those who create rich opportunities for children to make meaning from their own learning. Other pillars included connecting teaching meaningfully across several disciplines, using children’s interests and passions to drive curriculum and learning, and consistently building on practice based on new scientific evidence in childhood development—principles that are all in play at the School for Children.

To illustrate his final pillar—a deep commitment to social justice—Lippard described a civil rights-based project that an 8/9s classroom embarked on this year. They wrote letters of support to Gavin Grimm, a transgender 17-year-old who was denied access to the boy’s bathroom in his school in Gloucester, Virginia and was refused the opportunity to be heard in the Supreme Court. Audience members applauded after Lippard revealed that Grimm has made plans to visit Bank Street in May and speak with the students while he is in New York to receive a GLAAD Award (Gay & Lesbian Alliance Against Defamation).

“The sense of connection that our children feel beyond the walls of school—and not just learning for learning’s sake but learning because it matters and it ripples—is probably the best illustration of our work,” said Lippard. “Our curriculum is rich, strong, and constantly revisited and responsive to the realities of the world.”

During his speech, Lippard also highlighted a number of changes happening in the School for Children. From an admissions perspective, he noted expanded enrollment, an evolving student body with an increase in racial and socioeconomic diversity, and a rise in the number of families receiving financial aid. He also detailed the structural changes that will happen to the building over the summer, including multi-floor renovations and a new state-of-the-art science lab. In addition, Lippard recapped hiring news, professional development initiatives for teachers, the launch of new committees and cohorts across the school, and the planned revamp of the Bank Street website.

Lippard concluded with a touching thank you to the Bank Street community: “I just want to thank you all for embracing me and my family in our first year here. I feel like we’ve been here a lot longer than that, but it’s been an honor and I look forward to continuing to serve.”