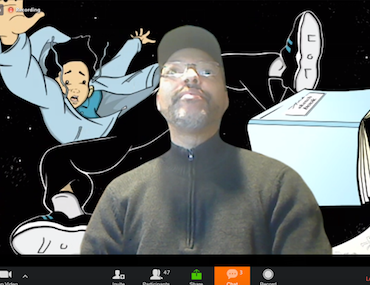 On April 6, Bank Street School for Children students tuned in from home for their first virtual session with award-winning children’s author and illustrator Jerry Craft. Craft, a New York Times bestselling author widely known for his groundbreaking graphic novel New Kid, was selected by the Center for Children’s Literature as Bank Street’s Dorothy Carter Writer-in-Residence for 2020.

A highlight of Bank Street’s curriculum, every spring the School for Children welcomes a prominent author to work with students in the 9/10s on their writing. This year, Craft, who was awarded the 2020 Newbery Medal and the Coretta Scott King Book Awards Author Award for New Kid, facilitated several lessons on key topics such as outlining a story arc, developing plot points and characters, and illustrating and planning the design of a graphic novel to help inspire and guide students as they wrote their own stories.

“The Writer-in-Residence program offers Bank Street students a meaningful and exciting opportunity to learn from some of the most talented children’s literature authors and build their creative writing skills and interests,” said Cynthia Weill, Director, Bank Street Center for Children’s Literature. “During these challenging times, we are so pleased to have been able to transition the program to a virtual format and continue to provide students with this special learning experience.”

To begin, Craft introduced students to his creative process for New Kid and discussed how he builds characters by thoughtfully considering details like their name, physical appearance, personality, props, food preferences, likes and dislikes, friends, and conflicts. Additionally, Craft discussed how he draws on much of his own life experiences, and that of his sons at times, when developing the story and characters, including New Kid’s main character Jordan Banks.

A seventh grader, Banks loosely reflects Craft’s life as an African American boy growing up in Washington Heights. Like Craft—who graduated from the Fieldston School in Riverdale—Jordan transfers from his local school to a prestigious (and mostly White) school. There, he encounters quintessential “new kid” problems, like getting lost, as well as deeper issues around race and class and the distinction of his two worlds.

“This is showing the greenery of Riverdale, and the trees, and over here is just the grayness of the city,” said Craft as he displayed a largely two-toned spread from the graphic novel to demonstrate a guiding principle of his work: show, don’t tell. “So, there’s a big contrast. You see what his life is and it’s like being in two different worlds and that’s really the essence of New Kid—of him having to go back each day from one world to the other world.” 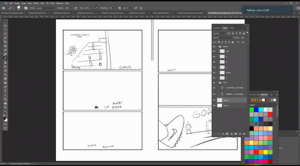 Craft expanded on the idea of “show, don’t tell” by explaining how he can creatively indicate which season it is by incorporating sports into the story or show that time has passed by drawing a clock. He also mentioned how he conducts research and works with a proofreader to ensure accuracy. For example, they checked the subway lines in the Riverdale area to confirm that the book’s art would realistically represent the neighborhood and the trains that pass through it.

Throughout the month of April, students continued working with Craft on writing and drawing and they also had the opportunity to ask questions in separate Q&A sessions. In early May, students will virtually share their graphic pieces with their peers.