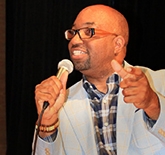 As a child, Kwame Alexander might have been the only young boy to get excited when his father told him to clean out the garage. For Kwame, the garage was a world of discovery. This particular space in their Virginia home was cluttered with milk crates stacked high, containing books of all sorts. They ranged from first editions of poetry to books on precolonial black Africa to books on methodology. The garage was his library, and his parents, both writers, and educators were his librarians.Kwame has a passion for poetry and a commitment to exposing young people to cultures and experiences beyond their own. His values support Bank Street’s mission of achieving social justice through education, which is why the College named Kwame its inaugural Dorothy A. Carter Writer-in-Residence. He will spend six weeks working with nine- and 10-year-olds in the School for Children on their poetry.

Now a published author, poet, and playwright, Kwame has written 18 books, two of which were NAACP Image Award Nominees. He received the 2015 Newbery Medal for The Crossover, a powerful novel written entirely in verse that follows a 12-year-old boy, his twin brother and their love for basketball. The narrative paints an authentic portrait of a close-knit family.

On April 6, Kwame joined his father, Bank Street alumnus Dr. E. Curtis Alexander, in an event titled Doing the Write Thing, 1969-2015: A Literary Legacy Conversation. In the discussion, moderated by author and historian Leonard S. Marcus, Kwame and his father reflected on their past experiences and expressed their ideals while demonstrating a close-knit relationship.

Jennifer Brown, Director of the Center for Children’s Literature, and Allie Bruce, Bank Street’s children’s librarian, knew they had found Bank Street’s Writer-in-Residence after a panel discussion that Bruce moderated at the School Library Journal Day of Dialog last May. Kwame, who participated in the panel, struck a chord in Brown when he said, “We all love, smile, cry. If we can get past the labels, we can become more diverse people, as opposed to trying to find diverse books.”

Introduced to poetry at an early age, Kwame listened as his mother read Nikki Giovanni’s Spin a Soft Black Song: Poems for Children. Later, he would take an advanced poetry class with the gifted poet herself, who helped him find his “groove.” Her improvisation method is what will inspire Kwame as he helps Bank Street students take a creative leap.

“You didn’t know what was going to happen each day in class,” said Kwame at one point during the conversation with his father. “That’s how I was taught. But you were going to take that risk. You were going to have a clearer understanding of how to make words dance on a page.” 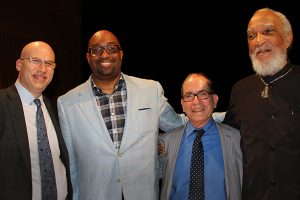 Kwame recalled finding two items in his attic: his father’s jazz records, and a scrapbook containing photos and front-page news features of his father playing basketball. When he sat down to write The Crossover, basketball, and jazz became sources of inspiration. They were hooks, and they were metaphors. As the Dorothy A. Carter Writer-in-Residence, Kwame hopes to help Bank Street students translate their own diverse experiences into poetry by adopting their individual “swag,” as he put it.

The Alexanders have a long history with Bank Street. Dr. Alexander, Kwame’s father, graduated from Bank Street Graduate School of Education in 1970 and, serendipitously, studied with Dorothy Carter. “Bank Street taught us about the common humanity,” he said. “All children are learners.” He encouraged his son when working with School for Children students, to “let them flow, let them soar. It doesn’t have to conform to your lesson plan.”

“Writing is more than pen and paper,” said Kwame. “This is the part of the writing life that I love. It’s about being able to live this authentic life, to have something to write about.”