Gavin Grimm Visits Bank Street School for Children Students - Bank Street College of Education Skip to content
Important Message
Bank Street College has closed its building and all programming through June. Please note that while our building is closed, we are still open for business online and staff are working remotely. Further updates will be posted here and communicated to our community.
Alert
Headlines

A deep commitment to social justice is at the heart of Bank Street’s approach to teaching and learning and a leading component of the curriculum at the School for Children. Every day, teachers use real life issues to inform and construct rich, meaningful learning opportunities that help students make sense of the world around them while supporting both their academic and social-emotional growth. 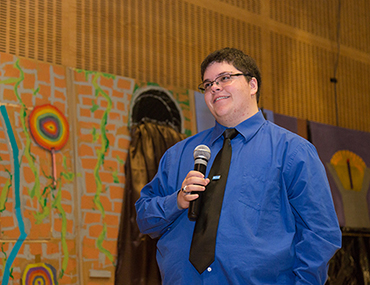 This year, Esther Gottesman’s and Edna Moy’s 8/9s classroom embarked on a civil rights-based project in which the students wrote letters of support to Gavin Grimm, a transgender 17-year-old who was denied access to use the boy’s bathroom in his high school in Gloucester, Virginia. Over the last two years, Grimm has been fighting with the Gloucester County School Board for his rights and, after a series of legal battles, was recently refused the opportunity to be heard in the Supreme Court.

The VICE documentary “Gavin Grimm: The Student at the Heart of the Trans Civil Rights Movement” spontaneously captured Grimm opening the students’ letters and his heartwarming response. The personal notes and words of encouragement prompted Grimm to arrange a visit to Bank Street to meet the teachers and children responsible for sending the letters.

The day’s visit began in Bank Street’s Tabas Auditorium with a screening of the documentary, which features interviews with Grimm, his family, and the voices of opposition in his community to illustrate his heartbreaking journey and how he found himself as a central figure in the transgender civil rights movement.

In the clip capturing the moment Grimm received the package of letters from Bank Street students, Grimm says, “I think it’s so powerful because young people shape our nation. It’s just further proof that the conversation is being had and it’s hitting a really great audience. I’m really resonating on a personal level with people, which is what’s really important here.”

Following the screening, Grimm took the stage to answer questions posed by an audience of School for Children students about his battle.

When one student asked, “What gives you the drive to wake up in the morning and fight for your rights?” Grimm replied, “It’s kids like you guys. It’s knowing that I’m making a difference and knowing that I’m making a positive impact in the lives of other people. I look up to you kids so much because you took the time out of your days to reach out to me, and everyone in this room has taken the time out of their day to support me and learn more about the trans community.”

Grimm’s responses were eloquent, thoughtful, and honest, and his visit posed a very unique and exciting opportunity for School for Children students to hear from a change maker firsthand. 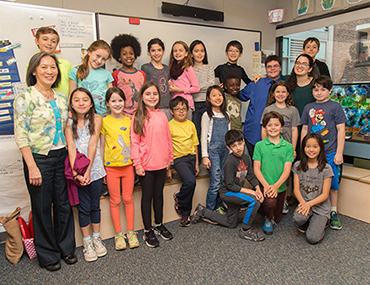 After the assembly, Grimm visited privately with the 8/9s students who wrote him the letters. During that time, they had the chance to ask him additional questions, share information about themselves, and chat with him casually. They also held a small surprise birthday party for Grimm where they enjoyed the blue birthday cake that the class baked and shared homemade birthday cards.

“The students were incredibly excited to meet their ‘hero and friend’ Gavin,” said Gottesman. “When they found out he would be visiting us, they literally jumped for joy. One student hoped our letters to Gavin and his resulting visit would encourage more people in the United States to learn about the lives of trans youth.  As a teacher, it’s very exciting for my students to have authentic opportunities to understand their power and impact. I hope they all continue to use their voices to create change in our world.”