On November 7, Bank Street welcomed authors Deborah Meier and Emily Gasoi to discuss the urgency around protecting the democratic spirit in public schools, which is the premise of their new book, These Schools Belong to You and Me: Why We Can’t Afford to Abandon Our Public Schools. The conversation was part of the College’s Niemeyer Series, an annual forum held at Bank Street that examines contemporary issues in education.

During the discussion, which was moderated by Bank Street President Shael Polakow-Suransky, GSE ‘00, Meier and Gasoi drew on their decades-long experiences in democratic school environments and touched on how educators and leaders can preserve and extend progressive values in the world of public education. The two authors shared anecdotes from their own educational journeys while navigating complex topics like how to effectively advocate for democratic public schools in an era that values compliance, authority, and control, as well as how to handle differences of opinion.

“We have created these institutions that are among the most authoritarian for the children who are compelled by society to spend six hours a day incarcerated in this setting; to some degree, teachers are, too,” said Meier. “Decisions are made from the top and passed down, where compliance is the greatest virtue and insubordination is fatal.” 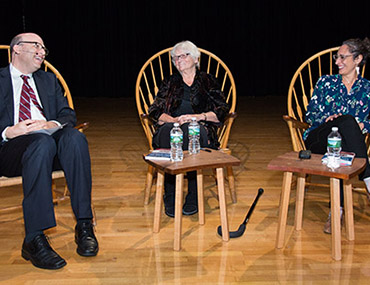 According to both Meier and Gasoi, running a democratic public school—and teaching in one—is no easy feat and certainly has its challenges, but the authors believe it is crucial to do so in order to create the types of nurturing and supportive schools that all children deserve. Meier recalled a particular experience with one of her kindergarten students, Darrell, that acted as a learning opportunity in her career to demonstrate the importance of democratic practice in the classroom. She had been teaching a lesson about living and nonliving things, and Darrell placed a rock in the box labeled “living.”

“I was trying very hard not to be authoritarian with Darrell, and to ask questions,” said Meier. “But he was one of those kids who not only stuck to his opinions, but had arguments so profound I think every single kid by the end of that discussion agreed with him. So I looked at another kid and saw she had brought in a leaf she found on her way to school, and I realized I was going to have problems about what box to put that in, too.” At that moment, she decided to scrap the project entirely.

“We are born scientists, it is true. The kids were proof that we had not lost track of their capacity for intellectual stimulus, discussion, and thoughtful ideas—and democracy was not some foolish idea of mine. It was a real possibility—but not if I kept thinking about what adults say.”

Gasoi added, “I think it’s really hard to be a leader of a democratic school. In our schools, we say we want all our students to feel loved and all children to have a place, which sounds so great. There’s an embrace or lip-service for those more process-oriented skills and values that are more conducive to democratic citizenship, but there’s very little change in what’s actually happening.”

This idea of authority and challenging authority was a recurring theme throughout the night. Polakow-Suransky asked the authors for advice on how educators can balance their respect for leaders while also advocating for more democratic leadership structures and processes. Gasoi responded with a theme pulled from her book on how to appropriately handle disagreements with leadership, and Meier, an outspoken critic of state mandated curriculum and high-stakes standardized testing, explained the concept of “open corridor” as a tool for building a more democratic community.

“My office was always open and accessible,” she said. “I wanted everyone, including the students, to hear me on the phone getting angry at people more powerful than me to display that we ourselves are not afraid of power. We don’t have to coddle students because the world won’t coddle them. But the opposite is not to terrorize them, either. How fearfully most of us live our lives. I’ve learned to cope with that fear as the price of democracy.”

The conversation was inspiring and reinvigorating, and Meier and Gasoi offered a fresh take on the current state of democracy in public schools and what is needed from teachers and leaders to work together toward a democratic vision. Meier, a staunch public school advocate for four decades, helped revitalize New York City’s District 4 in East Harlem and helped found the Coalition of Essential Schools to foster democratic communities, greater teacher autonomy, and parental voice in children’s education during her career in education. Before authoring their new book, she and Gasoi worked together at the Mission Hill School in Roxbury, Massachusetts, which Meier founded and at which Gasoi

worked as a founding teacher. Gasoi, current adjunct professor at Georgetown University, is also the founder of Artful Education, an organization focused on improved practices for creative teaching and learning. 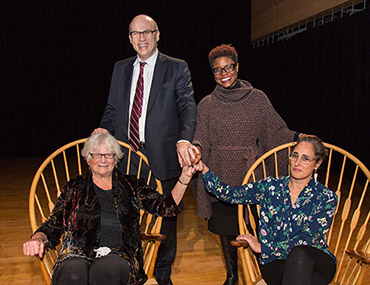 Polakow-Suransky closed the event with an acknowledgement of Meier’s iconic status in the field of public education: “After the work you’ve done, Debbie, there are now roughly 100 progressive schools in New York City. There is now a huge reservoir of capacities and ideas and it gives me a lot of hope. Teachers who have attended and grown up in these schools are becoming leaders. There is now a lot to work with in this city that can help guide our future. Thank you.”

The John H. Niemeyer Series presents lectures and symposia focused on urgent matters of educational interest. The Series is dedicated to the memory of John H. Niemeyer for his leadership in helping Bank Street College to become a national voice for children beyond practice and into policy.