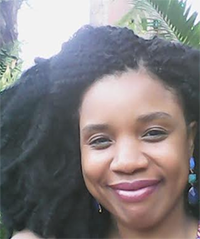 Dawn Campbell graduated from Bank Street on May 14th in the Graduate School Commencement Ceremony — an achievement both professional and personal. Graduating from Bank Street is not just a transition for Dawn, but a triumph.

After she discovered she was pregnant at the age of 16, Dawn Campbell left home and moved in with her boyfriend in the Bronx. When they separated, she returned to Queens with her daughter Aubrey, sleeping on friends’ couches or living with her mother. She endured several hardships as a young woman, but Dawn found her passion when she enrolled 3-year-old Aubrey in a Hollis Queens Head Start program in the year 2000.

Dawn had dropped out of York College two years prior in 1998 when she found it difficult to balance a college schedule with her job and taking care of her daughter. She had also been struggling financially; it was tough buying even the essentials like food and diapers. But through Head Start, she learned that Bank Street at the time offered a credential program that explored child development through a progressive lens, with substantial one-on-one support at no cost.

“The support and encouragement that I received at Bank Street was the push and the voice in my ear that helped me make the leap back into the world of higher education,” she said.

Dawn’s instructor encouraged her to continue her education using what she had learned as a springboard and a motivator. Following her completion of the program in 2003, Dawn decided to return to school that fall and pursue her bachelor’s degree at Lehman College, with the intention of later attending Bank Street for her master’s.

In 2010, while Dawn was finishing up her bachelor’s degree, her son Aaron, who was then 9 years old, fell ill with Leuko Encephalitis, a disease that causes inflammation of white matter in the brain. He became completely incapacitated and spent over a month rehabilitating at Blythedale Children’s Hospital. During this time, Dawn observed the work of the therapists. She saw how wonderfully they worked with her son and with other children. Aaron received medical care onsite and attended school every day, so long as he was able. When he wasn’t, a child specialist worked with him in his room. Through medical treatment and counseling, Aaron went from functioning at only about five percent on his own to nearly 100 percent. This experience influenced her decision to focus on special education in pursuing her master’s.

The following year, Dawn entered Bank Street to pursue her Master’s in Special and General Education. She currently works as a special education Kindergarten teacher in an Integrated Co-Teaching (ICT) classroom at Bronx Community Charter School.

“Bank Street has taught me that as educators, we must learn to value the process more than the product,” Dawn said. “This rings true in art experiences and many other areas of the classroom where children create.”

Dawn also attributes her approach as an educator to being a mother of four children: 17-year-old Aubrey, 14-year-old Aaron, 10-year-old Jeremiah, and 7-year-old Jonah. They are a large source of inspiration to her, and whenever she felt like giving up she remembered how important it was to press on because as a parent, she knows she is their role model.

Dawn often questions how she would handle certain situations in her classroom if her students were her own children. If a child comes to class grumpy, she tries to understand why.

“In order for children to respond academically, they have to be secure socially and emotionally,” she said. “I see so many children open up by having casual conversations, and then they listen to me when I try to help them academically.” 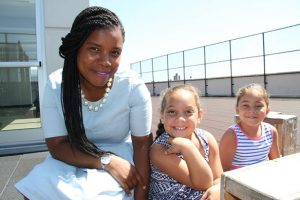 Dawn’s advisor at Bank Street, Sue Carbary, interviewed Dawn when she first applied. She also had Dawn as a student in several classes and watched her grow into a wonderful educator.

“Seeing Dawn in the classroom, I have been impressed with her respect and care for children and her commitment to the community in Bronx Community Charter School, Sue said. “I observed Dawn with her Kindergarteners in a school assembly the other day and was so proud to see her confidently and playfully lead the class.”

Bank Street recently partnered with BronxWorks, an organization that helps individuals and families improve their economic and social well being, to offer a community-based Master’s Degree in Early Childhood Education. In March, Dawn spoke at an information session for the program. Nancy Lauter, Project Director of the BronxWorks Master’s Cohort Partnership, was moved by Dawn’s spectacular presentation detailing her experiences with Bank Street.

“Dawn is an outstanding Bank Street ambassador,” Nancy said. “She tells her story of being a Bank Street student when she was a young mother of a Head Start child and again during the last few years with passion and gratitude. She embodies the Bank Street spirit of care and lifelong learning.”

Dawn really enjoys teaching at Bronx Community Charter School and wants to continue down the path of special education, because, as she says, “We must learn how to individualize and create meaningful experiences for all young children.”

She says Bank Street did that for her as well.