In Brownsville, Brooklyn, nearly 40 percent of residents live below the poverty line. Crime and violence are commonplace in the neighborhood, which totals just over one square mile and consists mainly of public housing units. School systems in such communities can present a number of challenges for kids and educators alike, but Meghan Dunn, principal of P.S. 446 in Brownsville, accepts each challenge as an opportunity for her students to grow.

Meghan Dunn grew up in Hamden, Connecticut. After graduating from George Washington University, she accepted a teaching position through Teach for America at P.S. 335 in Brooklyn, where she stayed for seven years. At that time, she also began pursuing her Master’s in Childhood Education at Bank Street. When Meghan was young, her mother had worked at a school in Connecticut that hired Bank Street as consultants. She told her daughter about the work they did and remembered the college many years later, which influenced Meghan’s decision to attend.

After three years of teaching first grade at P.S. 335, Meghan pressed the administration for the opportunity to loop with her class. Looping is when educators remain with the same group of students for longer than one school year.

“I was interested in seeing what happens next,” she said. “It was also an opportunity for me to really push myself.” 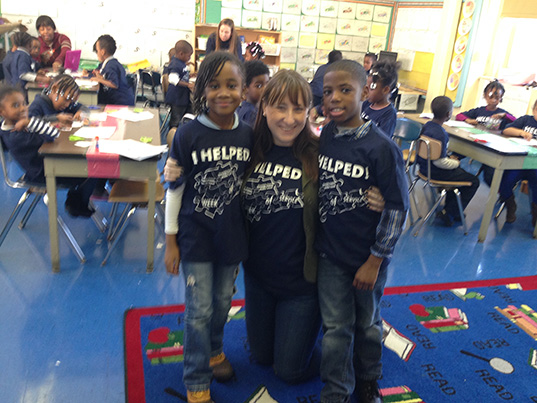 To Meghan, looping is a way of providing stable relationships for students and supporting those who struggle academically, socially, or who come from traumatic situations. The process offers a strong foundation for children to make a smoother transition into a new school year.

“They felt safe and valued like they were part of a system,” Meghan said. “We were able to really focus on deeper content and learning because a lot of that pre-work had been done.”

Meghan looped with her first graders for four years until they completed fifth grade, the highest level at P.S. 335. Around that time, she learned about a principal position at a school in Brownsville through a presentation given by the Office of New Schools.

“Through my experience with Teach for America, at Bank Street, and through my Leaders in Education Apprenticeship Program, I was able to observe a wide range of good and not-so-good practices,” she said. “It was an opportunity for me to take everything I’ve seen that works and pull it all together.”

Meghan applied for and accepted the position as principal of P.S. 446 in Brownsville. But working in a particularly underserved community, she has to deal with challenging issues on a daily basis that other school systems don’t typically see.

“Many students at P.S. 446 come to school having experienced trauma and crisis,” she said. “Some have spent years being hungry, and others have been victims of violence or have observed violence within their own families. Many children have been moved around frequently to different temporary housing shelters around the country.”

These factors can make it difficult to build relationships not only with the children but also with their parents. Meghan’s goal is to raise both their expectations and attitudes toward school. She tries to give individualized attention to every child and parent — her faculty isn’t afraid to have the sometimes difficult conversations on what each child needs.

Bank Street taught Meghan the importance of considering the whole child, and her school thrives on the idea that every child is unique and has different needs. In a recent ranking, P.S. 446 ranked highest in its district for offering students the special education services they need.

“If kids are not meeting expectations, we have to purposefully work to teach them whatever skill they are lacking,” Meghan said. “We have students on very creative behavior plans and schedules, and we are constantly trying to figure out what works.”

Her staff also teach children that it’s okay to need something different than others. She wants them to recognize what they need and to ask for it in appropriate ways.

“We ask kids what they need, and use this to inform any plans or supports that we have in place,” Meghan said. “We also have a school-wide meeting in each classroom for 30 minutes every morning, where teachers and students connect and share about themselves and their lives outside the classroom.”

Meghan predicts a promising future for her school and has full intentions of staying at P.S. 446. She believes in her children and her educators who “look at disenfranchised communities in a different way.”

“We’re on the precipice of doing something that’s so innovative and unique in our community,” Meghan said. “I want to see where it’s going to go.”