On May 3, sixth grade (11/12s) students at Bank Street School for Children explored the local community’s diversity of religious and spiritual beliefs at the third annual Diversity of Beliefs Panel Discussion. Part of the school’s humanities curricula, the panel is included in a grade-wide study of belief systems and featured a mix of Bank Street family members, friends, and teachers who shared their practices and experiences around religion and spirituality. 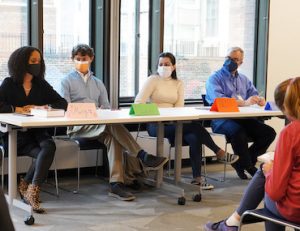 “The Diversity of Beliefs panel is one way we can bring the study home by inviting members from our own community to talk with us about the role of religion in their lives,” said Niki Singh, 11/12s Humanities Teacher, School for Children, and co-organizer of the event. “In addition to listening to a rabbi or an imam—to those who’ve devoted their lives to religion—our students also get to hear from the parents of their friends. They get to see the plurality that exists in the way that people practice their beliefs—that not all Muslim women wear a headscarf and that going for a walk is a mediation for folks across many religions, including those who do not believe in god.”

The conversation began with an introductory question, “What religion or philosophy do you practice and how did you come to it?” Panelists also spoke about daily life related to their beliefs, practices, or values; how their beliefs inform and enrich the way they live; and misunderstandings or negative stereotypes they would like the world to understand. 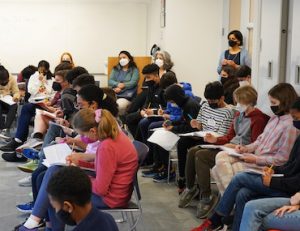 Following the panel discussion, students gathered in small groups with the speakers to further examine questions, such as “Was your choice of career influenced by your religion?” and “What do you do when you disagree with something about your religion?” Students participated in two rounds of small-group discussions and were able to meet with two panelists each.

“Even though the panelists had different practices, they had similar approaches to their beliefs. First, they all respectfully approached and accepted one another’s faith and did not say that the other’s religion was wrong or theirs was right,” shared a Bank Street student. “Matt said that the universe is full of mystery, and they all approach their beliefs knowing that there is an element of mystery.”

Another student added, “There were a lot of similarities between the panelists and their presentations, but one thing I noticed was the core ideas in question three. Most of them were adding on to each other and finding different ways to phrase ‘no one is perfect, but you can be a good person.’”

Next in their study, students will continue to visit places of worship, where they can ask more detailed questions. They will also engage in an undebate, a debate-style discussion that encourages consensus building rather than winning an argument, focused on the question, “Now that we have science, do we need religion?”

“Throughout the belief systems unit, we encourage students to continue to think of their own identity, as they’ve done in past years at Bank Street, by reflecting on how gender, ethnicity, race, ability, and other aspects intersect and play a large and small role in making them who they are, but we also add a layer about beliefs and how belief systems have an impact on who we are,” said Mollie Jones, 11/12s Humanities Teacher, School for Children, and co-organizer of the event.

In addition to belief systems, the humanities curriculum in the sixth grade includes social studies units, such as “Origin Stories as Explanations and Metaphors” and “Water as a Human Right,” a collaborative study with School for Children science teachers. Literature is also included in the curriculum and focuses on the units: “Poetry for a Cause” and “Mock Newbery,” among other studies.

“At least half of the country and more than half of the world say that religion is important to their lives.  In order to understand who we are as individuals and as a culture, we think it really helps to have some understanding of religion,” added Singh.

“We appreciate our community members for sharing their perspectives and helping our students deepen their understanding of the world in all of its diversity,” said Jones.

Learn more about the School for Children’s sixth grade program