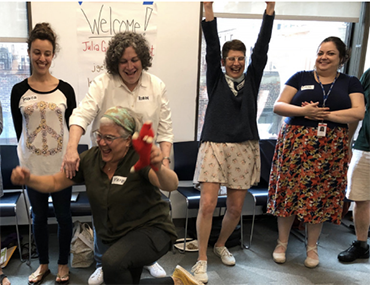 This June, the Bank Street School for Children (SFC) participated in a training on restorative practices, an approach that centers on building community through strengthening relationships between individuals and groups and repairing relationships after conflict and challenges have occurred.

Led by the International Institute for Restorative Practices (IIRP), 45 faculty and staff members from the School for Children, Graduate School of Education, and Bank Street Education Center attended the two-day training to deepen their understanding of the restorative framework and learn how to incorporate these practices into their classrooms and other locations of work.

“The premise of restorative practices—that everybody matters—is very much aligned with our beliefs at Bank Street,” said Jed Lippard, Dean of Children’s Programs. “In 2017-18, the School for Children authored a five-year strategic plan, which resulted in the identification of five key strategic priorities, including a priority on how to further support positive school culture and constructive discipline. One of the objectives within that was to think about a framework that aligned with our values and that would help with the development of people’s mindsets and skill sets.”

To help participants develop their understanding of restorative practice, facilitators spent the first day introducing the approach and exploring the supporting framework, including a closer look at the concept of the “social discipline window,” which illustrates how a combination of high control (such as limit-setting) and high support (such as engagement) creates a restorative setting where people in positions of authority do things with others, rather than to them (high control, low support) or for them (low control, high support).

The next day, IIRP facilitated models of circles, “a versatile restorative practice that can be used proactively to develop relationships and build community or reactively to respond to wrongdoing, conflicts, and problems.” Circles vary in format and in purpose, but all models allow participants to speak and listen to each other in a safe environment, which helps foster positive relationships and connections.

“Circles can be used to get to know each other, as a vehicle for talking about current events in our world or in our school, or as an opportunity to problem solve something that’s happened within the classroom community,” explained Lippard. “It’s also a vehicle for dealing with conflict. Many individuals and organizations are conflict averse and, actually, the restorative approach believes that conflict is essential to learning and to community building, and that conflict doesn’t need to be avoided—it needs to be embraced because that’s how people grow and learn.”

The training also explored how race, power, and privilege interact with the restorative framework.

“The trainers did a really wonderful job acknowledging the work we’ve done as a community around race, power, and privilege and linking that to the restorative frame. We dug into how different aspects of power, whiteness, maleness, and positional authority interact with the social discipline window.”

In August, select School for Children faculty will participate in an in-depth training on restorative conferences. IIRP defines a restorative conference as “a structured meeting between offenders, victims, and both parties’ family and friends, in which they deal with the consequences of the crime or wrongdoing and decide how best to repair the harm.”

With this framework, a facilitator uses a conference script that includes a series of open-ended questions to help direct the conversation. Questions, such as “what were you thinking about at the time” and “what impact has this incident had on you and others,” help the offender and the victim openly explore and reflect on their respective experiences. Inquiry and conversation further explore future actions that can “help make things right.”

Next school year, an IIRP consultant will work with the School for Children to expand on this work. To learn more about restorative practices, visit the IIRP website at iirp.edu