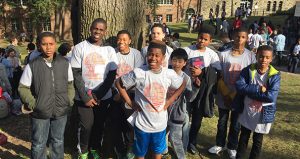 On Saturday, March 12, 250 or so boys of color, grades 6-12, and their chaperones convened at Ethical Culture Fieldston School’s Riverdale campus for the 3rd annual Young Men of Color Symposium. This year’s theme was “I Am Present: Using My Voice for Action,” a tie in with the novel All American Boys, whose co-authors Jason Reynolds and Brendan Kiely served as keynote speakers. YMOCS was held concurrently with (Re)Defining Power, a conference for and about white male voices in diversity work, and the day started with the authors addressing attendees of both conferences.

Bank Street School for Children has sent students to YMOCS each year, and while the conference has grown and changed, its mission throughout has been to support identity development in young men of color, addressing the specific intersection of race and gender for the attendees, many of whom attend predominantly white independent schools in the tri-state area. Workshops are offered separately to middle and high school students and range from redefining black masculinity, to challenging the myth of the model minority, to encouraging learning how to code or discussing career goals in general. Another important component of the symposium is affinity group work, with middle and high school students joining together in racial affinity spaces with adult facilitators, with an optional LGBTQ affinity group running at lunchtime.

SFC attendees expressed common themes of belonging, support, and openness. “It’s an awesome opportunity to connect with kids from all over, with different backgrounds yet who are similar, and being able to hear from a broader spectrum,” said one student who has attended all three years. “It’s nice being around people who look like you, have the same experience as you, and have the same struggles as you, and you can talk about it,” explained another participant. Yet another student expressed that hearing from people at other schools gave him a new, positive perspective about how race is discussed at Bank Street. Even first time YMOCS attendees conveyed enthusiasm in returning next year, and said they would recommend it to anyone who is eligible to go.