On September 28, the Bank Street Writers Lab received a prestigious Mentorship Award at the 2017 Carle Honors Annual Benefit Gala and Art Auction held in New York City. The ceremony, which is hosted by the Eric Carle Museum of Picture Book Art, celebrates individuals and organizations for their creative vision, dedication, and honorable contributions to the field of children’s literature.

Word on the Street sat down with Cindy Weill, Director of the Bank Street Center for Children’s Literature and Chairperson of the Writers Lab, to learn more about the Mentorship Award and how the Writers Lab, which turned 80 years old in 2017, continues to encourage and produce the highest quality literature for children.

Q: Can you elaborate on the nature of the Mentorship Award and what it means for Bank Street to be acknowledged by such a renowned institution?

A: The Eric Carle Museum in Massachusetts is devoted to inspiring a love of art and reading through picture books and presents four awards each year. The Writers Lab has received the Mentorship Award, which recognizes mentors, editors, designers, and educators who champion books for children and picture book art. The award has honored the lab for its rich history of leadership and support for writers and artists that respond to the needs of children through high-quality literature and illustration.
It is truly an honor and a great affirmation to receive such a prestigious recognition. While the award specifically credits the Writers Lab, we see it as an award for Bank Street as a whole entity. The College as an institution has provided the Writers Lab with the resources and encouragement to keep this important work going for 80 years. 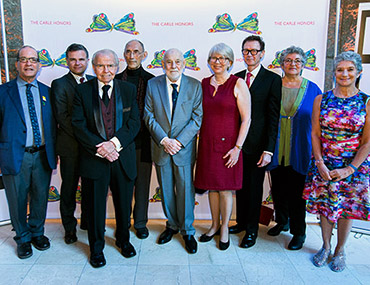 Q: What is the mission of the Writers Lab? Can you describe its recent work and any projects or achievements that would contribute to its recognition by the Carle Museum?

A: The Writers Lab creates a space for published children’s book authors to critique each other’s works-in-progress and encourage each other to strive for excellence. The Lab promotes the writing of literature that shows an appreciation of the language of growing children, is aware and responsive to children’s real and imagined worlds, and affirms the social and cultural heritage of every child. Our authors are alike in their mission to produce pieces that comprehend and respect the situations and dilemmas young children and adolescents face in today’s world and make it easier for them to understand and digest these experiences.

Current lab members include notable children’s book authors like Amy Hest (Buster and the Baby), Caron Levis (May I have a Word?), Doreen Rappaport (Stand Up and Sing!), and Angela Dominquez (Sing, Don’t Cry), among others. Past members have included some of the most celebrated names in the children’s literature field, such as Margaret Wise Brown (Goodnight Moon and Runaway Bunny), Maurice Sendak (Where the Wild Things Are), and Mordicai Gerstein (The Night World). Some of our authors have been with the lab for more than 50 years and have won several awards.

Q: How was the Writers Lab selected to receive this award?

A: The award actually came as a complete surprise to us at the Writers Lab. Renowned children’s book historian Leonard Marcus, one of the board members of the Eric Carle Museum, nominated the Writers Lab on his own. Leonard has a history with Bank Street and is involved in many of the College’s projects and events, including curating the exhibit, “The Picture Book Re-Imagined: The Children’s Book Legacy of Pratt Institute and Bank Street College of Education,” in the summer of 2016.

A: It has become increasingly difficult for even the best-known authors to find publishers for their work in this day and age. It is helpful for our members to be part of a supportive community where they can share resources, discuss the challenges they come across, and help make each other’s work the best it can be. Writers Lab members make writing for children a major part of their day, and the lab has consistently worked to create a collaborative space for them to do so.