On May 7, Bank Street College of Education hosted the 2015 Alumni Awards Ceremony, which celebrated Nina Jensen, Paula Rogovin, and Dania Vazquez for their outstanding achievements in education. During the ceremony, each educator stood before friends, family, esteemed colleagues, and members of the Bank Street community to share memorable moments from their careers, trends in their fields, and hopes for the future of education. 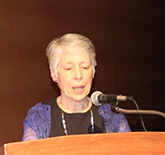 Nina Jensen (left) retired from her position as Director of Museum Education at Bank Street in June of 2013, a role she held since 1980. During her speech, Nina celebrated the important but often unpublicized work of museum educators.

Regarding trends in the field, Nina noted, “Museums are putting audience engagement at the center of their missions and operations across departments,” Nina said. “The second trend is that museums are proactively addressing social and environmental issues.”

She acknowledged the progressive model that Bank Street museum educators bring to museums.

“Museum educators are often playing leadership roles in these transformations, expanding their horizons and developing new skills,” Nina said. “This is at the heart of the Bank Street program.” 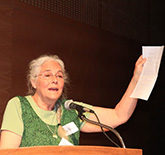 Next, Paula Rogovin (right) took the podium. Paula spent 41 years in education and is a strong advocate of multicultural education, interdisciplinary curriculum, and family involvement with a focus on inquiry curriculum. She is the author of several books and currently teaches Kindergarten at the Manhattan New School P.S. 290. In her speech, Paula provided several examples of her immersive style of teaching that she learned through Bank Street to help students learn about social justice issues. She acted out situations from books and news articles to help one class get an understanding of apartheid.

“We always try to find a way to get involved in social issues, and I want to thank Bank Street for that,” she said.

Paula’s students once expressed interest in learning about foods in the lunchroom. One child’s grandparents had been involved in a fight against the use of toxic pesticides in Long Island, and came to the classroom to speak with the kids.

Later, a council member also spoke to the class and invited them to come to City Hall to learn about how laws are made. “The kids asked him to make a law to ban toxic pesticides,” Paula said. “Here is the bill,” she exclaimed as she waved a piece of paper in the air.

Dania Vazquez closed the ceremony with an eloquent account of her experience as a dual language educator for over 34 years. She currently works as headmaster for Muniz Academy, a newly created innovation school in Boston that operates under a dual language immersion model coupled with the arts. She began her career at P.S. 25, The Bilingual School, and learned powerful lessons that serve as the foundation for Muniz Academy.

“When children come with what most people see as a deficit, we learned to see their strengths, and their strengths are what will unlock the path to their challenges,” Dania said. “Muniz Academy is rooted in what I learned at Bank Street.”

Dania celebrates culture with her students, and told a captivating story of a group of 11th-graders at Margarita Muniz Academy. They came into her office one January afternoon and told her about a protest they had organized to honor Black Lives Matter. They wanted to tell her so she “wouldn’t get in trouble.”

150 students marched in the protest and led the rally in both English and Spanish. They had recruited kids from other schools. Dania was thrilled.

“Students bring all of themselves to school every day and we inspire them to change the world,” she said. “We are those progressive folks in a sea of people who want something different. I want to challenge us all that the next hundred years have to be about how we make a difference.”