Research suggests that children who develop strong early math skills continue to perform well later on in school, not only in math but also in other areas of schooling. To further investigate this theory, social policy research organization MDRC teamed up with The Robin Hood Foundation to develop Making Pre-K Count, a research project based in 69 New York City public schools and community-based organizations that has stretched over the past three years and will continue until the children in the study are in third grade.

In Making Pre-K Count, coaches—several of whom are Bank Street graduates—provide ongoing, in-classroom support for teachers who are implementing the Building Blocks math curriculum in their classrooms. The coaches observe teachers, take notes, and then meet with them regularly so that teachers can share their reflections on what’s working, what isn’t, and can chart a path forward together. The program started in 2012 in eight New York City schools with three coaches and one program director. The following year, it expanded into 87 classrooms with 12 coaches.

Katherine Baldwin is a Bank Street graduate who began as a coach but is now Bank Street’s Program Director for the project. For her, the coaching model employed in Making Pre-K Count echoes many of the qualities of her fieldwork and advisement experiencess as a graduate student.

“My advisor, Bernadette Anand, would come and observe me in my school several times over the course of the year,” Katherine said. “She would stay with me for extended periods of time, interacting with the children and really getting to know me as a teacher. We would meet after these sessions, talk through my challenges and successes, and reflect on how I could improve. At Making Pre-K Count, I try to give my coaches similar support in the field. Supporting educators at all stages of their careers is one of the cornerstones of Bank Street’s progressive practice.” 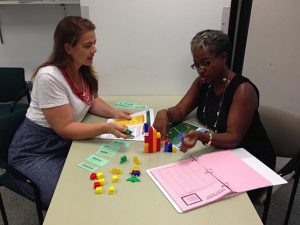 Coaches help teachers reflect on their students’ progress and plan effectively. They work with new teachers and experienced teachers alike, who often do not have access to regular support and feedback. Teachers who received Building Blocks coaching through Making Pre-K Count say they see their students grasping math concepts more quickly than in previous school years.

The coaching can act as a very powerful tool. Maria, for example, has years of experience in teaching but was new to her school (a public school in Bushwick) when Making Pre-K Count’s program started there. She says her Bank Street coach, Erica Buchanan, was pivotal in helping her implement the program effectively in what was a new environment for her.

“A new school can make anyone feel like a brand new teacher,” Maria said. “The program gave me confirmation that I was implementing Building Blocks correctly. I can see the growth in my students after using the program for just a few weeks. They use math language often, memorize songs, and truly enjoy the program as much as we do. Bank Street coaches are the icing on the cake. I leave every meeting feeling an immense sense of accomplishment and absolutely motivated to do even more.”

For Erica, Maria’s coach, the process was equally as rewarding. In one activity, Maria felt she was missing the objective. Erica observed the lesson and then, during their coach-teacher meeting, provided her with constructive feedback.

“She redid the lesson that afternoon and came to the right objective,” said Erica. “That was a winning moment for both of us. She trusted me, she took my advice, and she did it again, correctly, for the sake of the children and to get the right experience.”

Katherine also recalled, “Some teachers were skeptical at the beginning of the project. But after seeing how well their children were doing, how much they were learning, and all of the math languages they were using, the teachers were sold.”