Children have been playing for centuries. Through play, they acquire their own lens for observing the world around them. While parents and educators can provide children with tangible resources to inspire play, they cannot teach them how to play. It’s something that comes naturally, and is a crucial stage in child development. This concept is what shapes every early childhood classroom at Bank Street.

On April 11th, the College welcomed a range of moderators, presenters, and esteemed children’s book authors who share these values and implement them into their practices. The event, titled Building Blocks of Play: Art, Books, and Childhood, gathered a diverse audience eager to learn and advance as educators, guardians, and human beings. 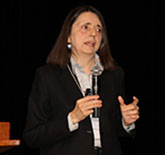 In her opening keynote presentation, Linda Mayes of the Yale Child Study Center and the Yale School of Medicine spoke eloquently on play in a historical and psychological context as part of the human condition.

“Play is as essential as breathing air or drinking water,” Mayes said. “It is universal and timeless. It is the essence of creativity.”

She admires the Bank Street approach for this very reason. It centers on a child’s inner world.

“Bank Street provides an oasis in the middle of an educational desert,” she said. “It sees each child as an individual. Teachers go far beyond the Common Core curriculum.” 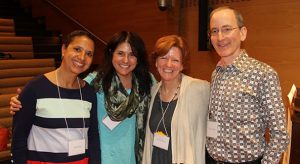 In her practice at Yale, Mayes focuses on social and cognitive development through birth to early adolescence. She explained that when children play, their minds enter a “creative space,” which lies between their inner realities and outer thoughts. Successful children’s books create platforms for children to enter this creative space. In their panel discussion, renowned children’s book authors Nina Crews, Laura Vaccaro Seeger, and Paul O. Zelinsky detail how their unique styles create an experience where, as children turn the page, they pause, anticipate, and imagine what is coming next.

For pop-up artist Becca Zerkin, pop-up books in particular can enhance this experience. They are playful, interactive, and offer an element of surprise. During the event, audience members learned how to make their own pop-ups in a workshop hosted by Zerkin.

Other children’s book authors also took the stage to explain how they create a playful experience. Robie Harris attempts to enter the mind of a child. A young boy who cherished his old, ripped-up quilt inspired her book, Turtle and Me. Many children have “loveys” as friends, protectors, and comforters, and would be able to relate to the story. Peter Reynolds appreciates technology’s role in making stories come to life. He describes great children’s books as “nuggets of wisdom made transportable.”

Betsy Blachly, head music teacher at Bank Street’s School for Children, grabbed her guitar and colored the stage with renditions of playful classics. She believes that music, by nature, is playful. It inspires creativity in her classroom.

In his closing keynote, Richard Lewis requested he speak without a microphone, engaging with the audience directly and personally. He dissected the growing nature of the imagining mind. He celebrates play as a great human instinct with a thrilling edge of mystery. Lewis delivers with passion and articulacy, leaving a lasting impression on the audience that will follow them into their classrooms, with their students, with their own children.

“The mind opens up the universe for each one of us,” Lewis said. “Perhaps play is literally what we feel and see and hear outside of ourselves. We feel that we are actually creating something that wasn’t there before.”