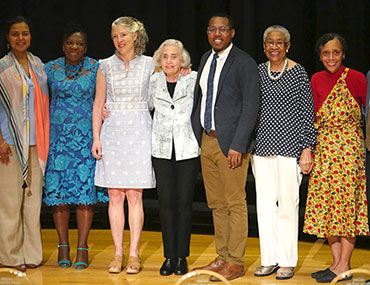 On May 23, the Bank Street College Alumni Association (BSCAA) hosted its 21st annual Alumni Awards Ceremony & Tar Beach Reunion Party to celebrate outstanding Graduate School alumni who have made unparalleled contributions to the field of education. The ceremony, which is the culminating event for the Alumni Association each year, honored six graduates from many corners of the field and one former dean for their powerful work that has made a difference in the lives of children, families, and communities.

Following their respective introductory remarks, the honorees took the podium to deliver moving acceptance speeches about their journeys in the field of education and what has inspired them in their work. First up was Vega, who has worked for decades with English Language Learners. She powerfully described her unwavering faith in their potential and how she consistently strives to be someone in their lives who wholly believes in their ability to succeed. Vega closed by introducing several of her English Language Learners in the audience and shared snippets of their inspiring stories. Speaking directly to the standing-room-only audience, she said, “Some of these youth sit among you as evidence that they can succeed despite the many challenges they’ve faced.”

Berner, the second honoree, used her time on stage to thank Bank Street for opening her eyes to the remarkable ways that children interact with and make sense of the world around them. She referenced the thoughtful and profound observations of the Hudson River made by her first-grade students, recalling one young girl who spoke about the river as a precious “gift” to human beings and how we must “give back to it.” Berner elaborated on the student’s metaphor to describe the gifts that Bank Street offers its community.

“I was asked to give an acceptance speech tonight, but I realize that the honor is not about receiving, but learning to pass along the gifts from Bank Street that I have been given. Celebrating children’s capacities, connecting them to the outside world, and believing that they, and all of us, can make a difference,” she said.

Next up was Barclift, whose early childhood advocacy work focuses on increasing opportunity for children of color. She spoke passionately about her mission to dismantle the effects of racism on our youngest children, which is a testament to her exceptional vision and unrelenting dedication to social justice. Her desire to make a difference in the world led her to establish Little Sun People, an early childhood institution in Brooklyn built on progressive values. In her speech, she captured the obstacles faced by young children of color through a metaphor that has long influenced her personal and professional mission.

“Imagine being told you must compete, but first you have to put on some thick socks with heavy rocks on them. Once the socks and rocks are replaced, then you can start. You get these socks at birth if you are a black or brown person, and it’s the extremely rare one who escapes… I found that it’s never too early to challenge those messages…. And how do we do it, we celebrate the impact of racial difference,” Barclift said.

The evening continued with Irby, who offered a glimpse into his lifelong mission to help children from underserved communities develop a genuine love of reading. His work began during his junior year in high school, which he described as the moment he first came to the disturbing realization that almost none of his classmates ever read books for fun. “As a science fair project, I surveyed over 200 of my peers to find out what their reading habits were. What I found out was that almost none of them read if it wasn’t required. That needed to change.”

That same year, Irby developed a reading incentive program for his classmates that encouraged them to find the fun in reading. Irby had found his calling, and he continues to fulfill his mission today through the nonprofit organization Barbershop Books, which he founded to promote child-friendly reading spaces in barbershops for boys ages 4 to 8.

Rounding out the BSCAA Recognition Award presentations was Trotter, who told the story of how she came to find joy in helping children learn how to cope with stress and practice positive thinking. After graduating from Bank Street with a degree in counseling and education, she asked herself what she could do to help children and how she could be of service. “I was able to get a job as a clinical educator and trainer. It was my job to ask, ‘How do we make stress education that comes to children in a form that they can understand?’ And that’s when I began using my Bank Street innovative teaching.”

Following the BSCAA Recognition Awards was the bestowal of the singular Distinguished Service Award, which went to Hillman. After accepting her award, Hillman shared Bank Street’s impact on her life over the years, particularly addressing how the College helped her recognize the power of experiential learning. As a result, in 1996, Hillman contributed to the revival of the Bank Street Long Trip, an opportunity for community members to encounter the complexity of a distant environment by confronting its social and political issues and the consequences for children, their education, and their families.

“And so, we became a tightly knit group of learners on each trip. We took back a new vision of the world and we were more closely connected to Bank Street,” she said. “And just as my thanks go to Bank Street, I want to thank them for offering the golden opportunity of the experiences we had.”

Closing out the ceremony was Ida Karp Award Recipient Fern Khan, who was recognized for her exemplary work as an educator and her consistent, outstanding dedication to the mission, philosophy, and long-term goals of Bank Street. With eloquence and grace, Khan spoke to how Bank Street continues to make a difference in the world by consistently building on the progressive traditions that have remained at the heart of its mission since the College’s earliest days.

“From the beginning, I was inspired by Bank Street’s mission that education could be a powerful source and force in creating a more humane society,” she said. “Furthermore, the College’s developmental framework has been quite effective with learners across diverse communities, especially when cultural competence is included.”

The accomplishments of the evening’s honorees deeply mirror the longstanding values that Bank Street has held close for over a century, namely its commitment to social justice and using education as a tool to create positive, meaningful change. Following the awards ceremony, guests gathered on the outdoor play deck for the annual Tar Beach Reunion Party to mingle over light refreshments, take fun photos, and continue to celebrate this year’s Alumni Awards recipients.

“I am deeply inspired by the work our alumni do every day, and in particular the honorees for this evening,” said Bank Street President Shael Polakow-Suransky. “What they share is a recognition that education can change the world, and that we as citizens of the world have a responsibility to engage in the hard work of opening up spaces of possibility for our students.”

Click here for videos of the full acceptance speeches.