“Black and Brown girls and women in particular are marginalized in schools and society. If we study their lived experiences and identity formation through multifaceted lenses, we can do an amazing job of opening our understanding of how the violences they face compound over time and create barriers to their happiness, wellbeing, and abundant life.” 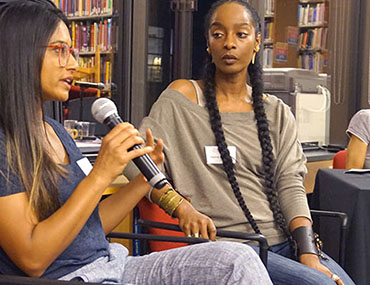 Her powerful words articulated the urgency behind the launch of Occasional Paper Series #38: “#SayHerName: Making Visible the t/Terrors Experienced by Black and Brown Girls and Women in Schools.” The new issue contains 12 critical essays written by Black and Brown female educators, scholars, and activists that explore the micro and macroaggressions that minority girls and women encounter across a range of teaching and learning contexts.

During the discussion, the panelists opened up about the traumas and distresses they’ve experienced as girls of color throughout their years of schooling and shared how those experiences influenced the sensitive topics they approached in each of their essays. Their stories were raw and emotional and built a strong case for the ways that Black and Brown girls are rendered less visible in academic and social settings.

Pamela Jones, author of the essay, “Under Surveillance: Interrogating Linguistic Policing in Black Girlhood,” expanded on how microaggressions affected her from a very early age and shared a story from one of her earliest memories as a six-year-old that stuck with her through adulthood.

“As a first grader, I was at a back-to-school night, and my parents didn’t know you weren’t supposed to bring your child. The teacher had written messages on the board for parents and asked me to read them. I was a bright six year old, and just read what was on the board. But my parents got a lot of congratulatory remarks like “thatta girl!”, and looking back I realize that at that moment, I was being situated as “articulate while black.” I was seen as being able to perform whiteness, and from that point on, I was expected to perform whiteness.”

Benavides reflected on some of her personal challenges, particularly how she was impacted by low expectations from those around her and a “subtractive schooling” system, which “strips s

tudents and families of their cultural resources in order to make them go into mainstream society.” Drawing on the focus of her essay, “Restorative Schooling: The Healing Power of Counternarrative,” Benavides proposed the idea of restorative schooling as a proven way of promoting academic achievement for marginalized students by “creating spaces for restoration by integrating a student’s culture into the fabric of schooling.”

In Williams’ remarks on her essay, “Let’s Say a Word About the Girls,” she discussed many of the stereotypes that shape the way Black girls are perceived and how, when labeled by these stereotypes, they “fall outside the boundaries of what is deemed acceptable, respectable, and even good.” She said, “These stereotypes affect the social, emotional, and educational experiences of Black girls by contributing to the ways they see themselves.”

The many stories shared by panelists prompted a broader discussion—with engagement from the audience—on the need for transformative solutions that support the happiness and wellbeing of Black and Brown girls and women in schools and other settings.

“What I really wanted to do with this issue was to say, ‘Let’s privilege these voices,” Staples said. “Let’s listen intently and develop our pedagogies and develop our grammar of oppression. Let’s understand violence differently across a broad spectrum to empower ourselves to do more social justice work.”