Niemeyer Series Welcomes Amy Stuart Wells - Bank Street College of Education Skip to content
Important Message
Bank Street College has closed its building and all programming through at least April 20. Please note that while our building is closed, we are still open for business online and staff are working remotely. Further updates will be posted here and communicated to our community.
Alert
Headlines

On November 19, Amy Stuart Wells, Professor of Sociology and Education and Director of the Reimagining Education Summer Institute at Teachers College, Columbia University, presented an informative lecture at Bank Street College titled “Segregated Pedagogy; Segregated Schools: The Role of Progressive Education in the Drive for More Culturally Responsive Schools.” Her presentation was part of the College’s Niemeyer Series, an annual forum that explores contemporary issues in education. 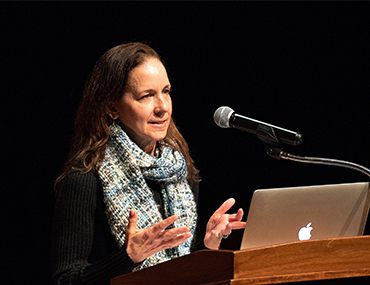 As a sociologist of education, Wells explained that much of her research and policy work focuses on examining the historical and social context of education. In her lecture, Wells discussed how knowledge from the field should be used to inform educational policy, yet far too often, that is not the case. To improve our schools, Wells recommended connecting multicultural education, culturally responsive pedagogy, ethnic studies curricula, and progressive education work.

“When we think of learning, intelligence, and ability only in terms of didactic or deductive thinking and focus exclusively on content, discreet information, or skill acquisition that we measure through standardized testing, we leave no room for more authentic, constructivist, or multidimensional ways of understanding knowledge,” she said. “The scales have tipped so far in that direction when we think about policy discourse and how we’re defining good schools and good students.”

Wells stated that results from standardized tests prompt changes to school curriculum, which minimize the role of the teacher and reduce the opportunity for students to build important skills like critical thinking and communication. For this reason, many parents have joined the “Opt Out” movement to protest standardized testing and have enrolled their children in private schools—if they can afford to.

Additionally, Wells explained that standardized tests and the policies associated with them are part of the new “Jim Crow” of education targeting low-income communities and students of color. This system includes four pillars: the test score, or achievement, gap; the practice of teaching to the gap; the discipline for low test scores; and the justification of segregated schools based on the test score gap.

The test score gap “reinforce[s] labels of schools with large percentages of historically minoritized students as bad schools,” she said. “This relates to the role of culture in testing and the cultural biases inherent in the testing industry, which leads to a system in which the best test-takers look most like the test-makers.”

Wells also cited the racial disparities in Gifted and Talented programs in New York City schools along with the Making the Grade report, which was released by the School Diversity Advisory Group in August 2019 before recommending the elimination of the Gifted and Talented admissions test, as well as phasing out the program. 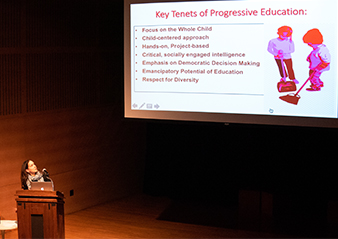 As a call for meaningful change in educational policy, Wells proposed a united advocacy among educational approaches, including progressive education, multicultural education, culturally responsive pedagogy, and ethnic studies. While each of these approaches vary in focus, all incorporate a child-centered philosophy, support home-school-community connections, include a history and mission of addressing educational inequality, elevate the role of educators and curriculum development, and believe that schools have the ability to transform society.

“There is a strong and robust research and evidence base in our field for why we should do this—why we should have a more concerted effort to build a political movement that would shift policies away from test-based accountability systems and toward more child-centered and culturally relevant strategies,” said Wells. “The importance of culture and life experience in shaping knowledge is something education researchers and practitioners have known for a very long time. Unfortunately, this understanding of how students learn is not reflected in how they’re assessed, and that is something that we need to change by leveraging this knowledge of the field.”

Cecelia Traugh, Dean, Bank Street Graduate School of Education, said, “After hearing Amy Stuart Wells speak at an earlier event about her work on bridging the divides between progressive, multicultural, culturally responsive, and ethnic studies education, I realized that she and her students were working on issues that we at Bank Street are also working on. I asked her to give the Niemeyer lecture this year to bring her efforts to our attention, so that we could join her with this important body of thought and work.”

The Niemeyer Series comprises lectures and symposia focused on urgent matters of educational interest. The Series is dedicated to the memory of John H. Niemeyer, Bank Street’s second president, for his leadership in helping Bank Street College of Education become a national voice for children beyond practice and into policy.