In the early 1970s, Robie H. Harris sat in Central Park, holding her first-born baby boy. Her young nephews surrounded her, fascinated by the infant, and started asking questions. How do you know when he’s hungry? How does he learn to talk? How does he learn to walk? When did I learn to talk and walk? Their curiosities captivated Robie, and she went on to publish her first book Before You Were Three, co-written with children’s book author and cousin Elizabeth A. Levy.

Kids, naturally curious and always evolving, have lots of questions. Robie, an award-winning children’s picture book, and nonfiction author, uses her writing to answer these questions with stories that ring true and resonate with children. She hopes that her books will help children understand that having powerful feelings, as well as questions and concerns about all kinds of topics, is perfectly normal. She is known for approaching sensitive topics in her stories, ranging from love and anger to fear and sibling rivalry, from HIV/AIDS and STDs to cyberbullying and reproduction. Her books have been challenged and even banned, but Robie believes children have a right to the information they seek and a right to have their feelings validated through the books they read.

Robie’s experience as an educator and a parent has shaped her approach to children’s literature. Brought up in a family who valued giving back, Robie knew she wanted to teach. When a friend enthusiastically suggested she apply to Bank Street College of Education, Robie took her word. She spent a full day with Charlotte Winsor, a long-time Bank Street faculty member. They visited a preschool classroom where Robie saw a young child standing at the water table, holding two baby dolls upside down in the water. Robie was taken aback. 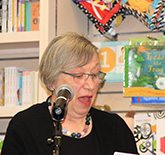 Charlotte told Robie that this child’s mother had just given birth to twins and that school was a safe place for her to play out her strong and legitimate feelings. She also told Robie not to be afraid of children’s strongest feelings. Charlotte’s words played a large role in leading Robie to become the children’s book author she is today.

After graduating from Bank Street, Robie accepted a teaching position at the School for Children. She later ran a program for parents and siblings of the Head Start children at the Bank Street Early Childhood Center. Child’s Eye View, a film about the daily lives of the siblings, was initiated and directed by Robie and chosen to be in the Lincoln Center Film Festival. In 2002, she received the Bank Street Alumni Recognition Award, and in 2008, her book Mail Harry to the Moon! won Bank Street’s Irma Black Award for Excellence in Children’s Literature. After moving to Cambridge, Massachusetts and living there for many years, Robie returned to New York in 2011 and remains heavily involved with the College.

Robie incorporates Bank Street’s values by focusing on the interplay of the emotional, social, and cognitive life of the child in her books. But not everyone agrees with her choice of topics.

One of her books, Who’s In My Family?, was removed by the National Library from all libraries in Singapore. The story depicts families of many configurations. It references children with a gay parent or parents, which some citizens in Singapore objected to. Even though other citizens spoke out and defended the book’s content, the National Library destroyed all copies. But many people support and admire the messages behind Robie’s work. At this month’s Bank Street conference, “The Building Blocks of Play,” a woman approached Robie, holding the book. She explained that she was from Singapore and that she spoke out against the ban.

“Kids need to understand that we live in a diverse community, and to respect one another,” Robie said. “That’s one of the many reasons I wrote this book.”

Robie’s first experience with censorship occurred when the popular television show Captain Kangaroo came to Bank Street. She wrote the show’s daily five-minute opener for a full year with Bank Street children’s book authors Irma Black and William H. Hooks. Their first segment listed the rooms in a home and furniture typically seen inside each room. But the show’s lawyers told them that the word “toilet” had to be taken out of the segment.

“All three of us said that leaving that word out would be a disservice to children and dishonest,” Robie said. “And that saying the word “toilet” would not harm any child.  We disagreed strongly with the lawyers, but they decided to remove the word despite our objections.”

Robie’s children’s books stirred the pot on a much larger scale. It’s Perfectly Normal, which discusses puberty and sexual health is fifth on the latest American Library Association’s Top Ten Most Challenged Books in America. Robie respects the fact that not everyone agrees with her books. But if something is in the best interests of the child, she will include it.

“I’m going to put it in, no matter what any adult says,” Robie said. “It’s not about them, or me. It’s about the children.”

Robie often speaks with experts to make sure that her content is medically and scientifically accurate and psychologically appropriate. The backs of her books typically contain lists of people, ranging from parents to teachers to educators, librarians, geneticists, reproductive biologists, and psychologists. Through their conversations, she tries to understand, and then write, what children think is “real, authentic, and honest.”

“If not, kids won’t look at them,” said Robie. “They know at some level if a story is being overly sweet or leaving things out that they already know or want to know about. They will put that book down and not continue.”

Robie does leave certain content out of her work, but only if she thinks it’s not age-appropriate. Every book she writes is difficult. She says you have to make choices. In her latest nonfiction picture book, What’s So Yummy?, some suggested that she not put in anything about allergies. But Robie felt that most kids know about allergies, whether they have them or not, and that all kids need to know about food allergies. So that topic is in the book. 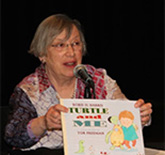 Some of Robie’s stories incorporate elements of her own experiences. For example, she can remember the very moment each of her kids told her “I hate you.” She then realized they were just angry, and that sometimes “words just pop out of our mouths before we can stop them.” In The Day Leo Said I Hate You!, Robie follows a mother and son as they deal with Leo’s range of strong, but normal, and even loving feelings.

Robie worries for children who don’t have access to certain information. Death, for instance, is a very emotional topic that is difficult for many parents and teachers to approach. In Goodbye Mousie, Robie tells the story of a little boy when his pet mouse dies. First, he thinks the mouse is asleep. When he realizes it’s dead, he wants to know why. He becomes angry. In the end, he makes a shoebox sarcophagus containing memorable trinkets for his friend and feels somewhat accepting that his Mousie has died. In August of 2001, Robie interviewed with Al Roker on The Today Show set about Goodbye Mousie. It was scheduled to air the week of the September 11th attacks but understandably was not able to be shown. The book has since been widely used by parents and educators to explore the feelings of loss that most children, even young children, experience.

Robie tries to enter the mind of a child. Her latest book, Turtle and Me, tells the story of a young boy and his plush toy turtle. Many children have “loveys,” or certain items they cherish that act as friends, protectors, and comforters. Her book poses the questions that many children have: Am I too big to have a lovey? Am I too old?

Robie tackles issues in her books through storytelling. She knows not every book is for every child, but believes every child deserves answers to their questions. For Robie, the questions, concerns, information, and feelings children have and wonder about day in and day out turn into books.