Once again this year, on the second Monday of October, Bank Street College was closed for business. For the first time in our history, however, all Bank Street calendars marked this holiday as “Indigenous Peoples’ Day” rather than the federally recognized “Columbus Day.”

While this change in nomenclature is not unique to Bank Street—in fact, four states, a growing number of municipalities, and various independent schools and public school districts in recent years have elected not to apotheosize Columbus—what is unique is how this change came to be in our community. Indeed, this is a Bank Street story.

For many years, through reading literature, facilitating class discussions, and examining current events, School for Children teachers have used the occasion of Columbus Day to problematize how our history has been narrated across generations, the role that power and privilege (in particular White, male Eurocentrism) play in shaping curriculum, and the stories of those whose voices continue to be systematically silenced.

Last year was no exception, as these conversations played out in developmentally appropriate ways across all age levels and divisions of the school. One group of children in the 9/10s, however, felt particularly compelled to turn their learning into action. 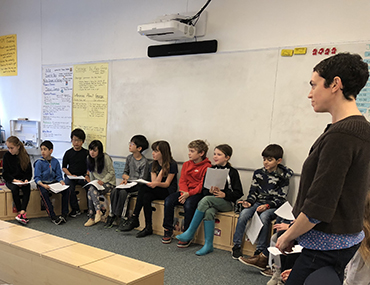 Under the skillful guidance of Chaylor Johnson and Becky Eisenberg— and for only the second time in recorded memory—these 20 students brought a well-researched and impassioned policy proposal to President Shael Polakow-Suransky, GSE ’00, and the Cabinet of Bank Street College. [The first such occurrence took place in the 1990s when a group of students successfully appealed to the then-President to forbid adults from smoking cigarettes in front of the building.]

With each student reciting a portion of the proposal, they addressed the historical inaccuracies of Columbus’ “discovery” of America, presciently emphasized the gravity of truth-telling, exhibited their understanding of and commitment to social justice, and channeled Lucy Sprague Mitchell’s call for us to demonstrate “flexibility when confronted with change and the ability to relinquish patterns that no longer fit the present.”

In essence, they proclaimed that as an institution committed to “gentleness combined with justice in passing judgment on other human beings,” we should no longer be calendrical homage-payers to an individual whose actions contributed to the genocide, enslavement, and cultural destruction of a nation of people.

While met with overwhelming approval from the Cabinet, the work of these students was not yet finished.

“Bank Street College is a progressive institution in which the broader community deserves a voice in the decisions that impact them,” said President Polakow-Suransky in a written response to the students. He stipulated that in order for their policy proposal to be ratified, these young change makers would also need to go before the broader Bank Street faculty and staff community at an All College Meeting led by the College Advisory Council and, separately, present their idea at a School for Children faculty meeting. And so they did, each time with even more confidence and conviction than the prior.

Now, thanks to these committed students, October 8, 2018 and all subsequent second Mondays in October are now known throughout Bank Street College as Indigenous Peoples’ Day. Not because a group of reform-minded grownups sat behind closed doors to make a politically correct policy decision. Not because of outside pressure or a desire to keep up with the Joneses. But rather because a group of children, informed and inspired, engaged in rigorous research, turned idea into action, looked deeply into the mirror of social justice, and ultimately did what they knew was the right thing to do.