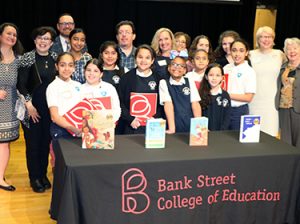 On April 4, the Children’s Book Committee at Bank Street College welcomed librarians, authors, illustrators, editors, and more from the children’s literature community for its annual awards ceremony. Presented by the Bank Street Center for Children’s Literature, the awards recognize the recipients of the Flora Stieglitz Straus Award for nonfiction, the Claudia Lewis Award for poetry, and the Josette Frank Award for fiction.

Each year, a committee of experts in children and literature review thousands of titles to discover the best books for young readers. This year’s honorees included: Dreamers by Yuyi Morales (Younger Reader Category) and Just Mercy: A True Story of Justice and Redemption by Bryan Stevenson (Older Reader Category) for the Flora Stieglitz Straus Award; They Call Me Güero: A Border Kid’s Poems by David Bowles for the Claudia Lewis Award; and A Heart in a Body in the World by Deb Caletti for the Josette Frank Award.

“I marvel at the efforts of our 50-member Committee to create our best book lists, work with young reviewers, and identify books for our literary prizes,” said Cynthia Weill, Director of the Center for Children’s Literature. “This group of volunteers evaluates books for their literary quality and considers their potential emotional impact on children. We hope that our work will help introduce young readers to wonderful books and inspire a lifelong love of reading.”

To kick off the presentation, author-illustrator Yuyi Morales was honored with the Flora Stieglitz Straus Award for Younger Readers for Dreamers, a lyrical picture book that tells the story of her immigration from Mexico to the United States in 1994 with her infant son. Through vibrant illustrations and text in both English and Spanish, Morales shares how the public library helped her understand a new language and make a home in a new place.

In a video from her home in Mexico, Morales said, “It made me so happy to think that what you’re seeing in books is how you find courage in those stories and how you find hard work, determination—how you find beauty while our world is changing. . . . I know that by recognizing [my book], you are also recognizing that there are many, many others and many voices that create in ways that [provide] resources and tools that our children [need] at these times.”

Next, Bryan Stevenson was presented with the Flora Stieglitz Straus Award for Older Readers for Just Mercy: A True Story of Justice and Redemption, a powerful account of the experiences of those on death row. Stevenson has dedicated his life and career to challenging racial and economic inequities, and he is the founder and executive director of the Equal Justice Initiative, an organization committed to ending mass incarceration.

“In this country, we now have the highest rate of incarceration in the world,” Stevenson said in his video. “I wanted young people to have context for what they see. We have too many young kids who live in communities where there’s an expectation of incarceration. . . . We’ve got to find ways to help kids cope and manage with these threats, with these problems, and Just Mercy was my effort to getting young people and the nation to understand the threat posed by mass incarceration and, more than that, the great opportunity we have to create a more just society.”

David Bowles was honored next with the Claudia Lewis Award for They Call Me Güero: A Border Kid’s Poems. Bowles, who is Mexican-American and from deep South Texas, tells the story of a 12-year-old Mexican-American boy—nicknamed Güero for his light skin—who writes poetry to describe his life living along the US-Mexico border.

“I wanted, above all, for Mexican-American kids, for Latino kids, to be able to look at this book and see themselves reflected. And for other kids who are not from our community, to look through the window of the book into our lives and say, ‘Those lives are a lot like mine. Those traditions sound wonderful.’”

To conclude the ceremony, Deb Caletti received the Josette Frank Award for A Heart in a Body in the World, an empowering young adult novel about 17-year-old Annabelle who takes off on a cross-country run to escape the guilt and pain she feels after a traumatic incident.

“[Annabelle] goes from powerless and voiceless to the power of the voice,” said Caletti. “I wanted to tell my readers that I, like Annabelle, have struggled and I’m still trying to grow from that, but as a writer and a human being, I believe. [I still] deeply believe in the power of one voice—a voice that can speak of pain and fury and a deep need for a better world—a voice that can join other voices. I want to tell my readers that I believe in their voice and I believe in voices. Together is how things can change. ”

In addition to the awards, the Committee also creates an annual Best Children’s Books of the Year list. The list includes 600 recommended books of all genres from birth through age 18—some noted with an asterisk to recognize outstanding merit. This year, a new symbol to indicate books that reflect diversity, “D,” was added and the Committee also released its first ever Best Children’s Picture Books of the Year in Spanish (pdf) list.

“Children’s literature has always been a central part of Bank Street’s mission,” said Shael Polakow-Suransky, GSE ’00, President of Bank Street College. “We’re hoping that this list is going to grow and become the same resource that our original list has become for so many educators.”