Events throughout the 2020-21 school year brought increased awareness around systemic racism and a deeper understanding among educators of the need to build inclusive, anti-racist environments where children, families, faculty, and staff of all backgrounds can thrive.

To help support equitable systems change across the education landscape, the Center on Culture, Race & Equity (CCRE) at Bank Street College created the CCRE Collective, an online cohort-based program designed to support leaders in reimagining and redesigning inequitable systems in learning environments and communities where children and adults live and learn.

Launched in September 2021, the new program brought together like-minded educators and leaders in a series of workshops, Communities of Practice, and coaching sessions to help support the development of culturally responsive learning environments and bring about transformational change in an organizational context.

During the 2021-22 school year, 20 participants from six organizations, including professionals from schools, school districts, government agencies, and non-profits, met with several experts from CCRE for a series of workshops, group sessions, and coaching circles. The curriculum aimed to help participants deepen their knowledge around understanding racism and its impact in education settings, support the development and use of strengths-based approaches to support all students, foster lasting connections and relationships between members, and develop practical strategies to advance equity in communities.

“More and more people seem to be realizing that the one-off diversity workshop model doesn’t work,” said Megan Madison, Equity Consultant and Facilitator, Center on Culture, Race & Equity, noting the effectiveness of the CCRE Collective model in preparing leaders to create meaningful change in schools and communities. “In addition to learning foundational equity content, participants are supported in and accountable for applying their learning through ongoing Communities of Practice and coaching. By the time we got to the end of the year, participants had built skills and relationships that will continue to support them in their leadership journeys for years to come.” 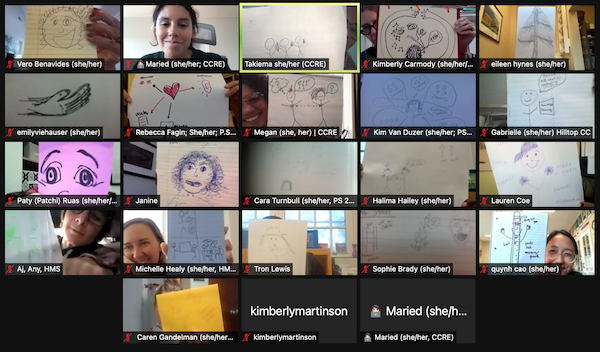 The program included quarterly workshops led by Madison; Maried Rivera Nieves, Project Manager, CCRE; and Veronica Benavides and Takiema Bunche Smith, who both served as former executive directors of CCRE. Participants examined systemic racism in the United States and its manifestations in classrooms; the school-to-prison pipeline; and the disproportionate push-out, erasure, and criminalization of Black, Indigenous, and people of color (BIPOC), low-income, disabled, and LGBTQ+ children, among other topics.

Discussions centered around exploring the experiences of students and the ways in which institutions, policies, practices, and mindsets often protect and sustain dominant culture to the detriment of marginalized youths in schools. Later in the year, the cohort shifted their conversations to solutions for addressing these critical issues and creating sustained impact. Topics such as active listening, leading for equity, designing for brilliance, and exploring challenges and dilemmas helped participants learn skills that they could bring to their roles as leaders in their current and future roles across the field of education.

In addition to the workshops, the program included several Communities of Practice meetings. Participants gathered virtually in small groups to discuss challenges they were experiencing as part of their equity work and employed a “consultancy protocol approach” to facilitate collaboration and expansive thinking about any dilemmas that emerged. Participants also received direct coaching support while growing their ability to coach others through a series of Coaching for Equity Circles.

Patricia Ruas, a mentor teacher at Hilltop Children’s Center in Seattle, Washington, and CCRE Collective participant, described her experience: “I learned that through collaboration and in being in relationship with each other, we found ourselves in a space where we could challenge narratives, rooted thinking, and forced social contracts. In those moments, we were able to do transformative work within ourselves and around us,” she said. “I valued CCRE’s take on practicing a community-based model, constructing the knowledge together, making space for participants to share their expertise, and encouraging leadership within the group.”

Ruas also spoke about some of the changes that have taken place at her school as a result of her participation in the program: “My organization has been considering and implementing some protocols to effectively support equity work within our walls and, consequently, the external community,” she said. “We are in agreement that some of our current thinking needs to be challenged, reassessed, and transformed to better translate the anti-racist and anti-bias work we are committing ourselves to.”

Reflecting on the first year of the program, Madison said, “As a facilitator, it was beautiful to witness the ways that making progress on racial justice goals built a sustaining hope that participants could draw on in all aspects of their leadership. Participants didn’t end racism by the end of the school year, but they did make real, measurable, meaningful progress on something they really care about. And that helped replenish a sense within themselves and across the cohort that they are skilled leaders who really do have the power to do something impactful, to make a difference, and to make the world a better place for the children and families they serve.”

“The CCRE Collective not only provided a space for committed educators, leaders, and families to deepen their skills and practice, but it also connected diverse people with the common goal of building a more equitable world for our children,” said Benavides. “The relationships created will last well beyond the tenure of the program and will continue to serve as a source of inspiration and support for participants.”

In September, the CCRE Collective will welcome its second cohort. Educators and other professionals with experience leading conversations about race, equity, and inclusion are encouraged to apply by the deadline of Friday, August 12.

To learn more and apply, visit the CCRE Collective webpage