On Tuesday, April 26, 120 guests gathered for the Bank Street Celebration: The World As Our Classroom event, which recognized the College’s many contributions to the field of education and raised funds to support its vital work.

Formerly the Annual Dinner, the Bank Street Celebration welcomed friends from the Bank Street community and beyond to support its mission and honor those who share its passion for high-quality progressive education. The event comprised small dinner parties hosted by three Trustees in their own homes coupled with a viewing of a celebratory virtual program that was live-streamed for the broader Bank Street community to enjoy.

This year’s celebration honored Carol B. Hillman, GSE ’67, President of New Salem Preserves and President of New Salem Cider, as well as Robert (Bob) A. Iger, Former Executive Chairman, Chairman of the Board, and CEO of The Walt Disney Company and School for Children grandparent. Both honorees have formed a deep connection to Bank Street and its mission over the years, with Hillman being honored for her lifetime of service and commitment to advancing early childhood education and Iger for his philanthropic leadership and dedication to the field of education at large.

Hillman attended Bank Street twice, earning an MSEd in Early Childhood and Elementary Education in 1967 and returning for an MSEd in Educational Leadership in 1987. Throughout her career, she has stayed involved in the Bank Street community, serving on the Dean’s Advisory Council and the Board of Trustees and helping revive and lead The Long Trip at the Graduate School. In 2018, Hillman received the Bank Street College Alumni Association (BSCAA) Distinguished Service Award. A committed donor and volunteer, she has hosted annual potluck dinners at her home for over 20 years as co-chair of the alumni group in Westchester.

Bob Iger has had a huge impact on entertainment for children as the former CEO of The Walt Disney Company, president of ABC Television, and COO of Capital Cities/ABC. His children are School for Children alumni and his grandchildren are current students, and he has been a longstanding champion of his family’s involvement at Bank Street. Bob continues to support the institution’s mission to improve education and work towards inclusive, impactful education for all students and teachers.

The virtual program began with sound bites from School for Children and Graduate students and faculty sharing what they love about Bank Street: “it’s a family” and “we sometimes learn from playing.” There was also a clip from Doug Knecht, Dean of Children’s Programs and Head of the Bank Street School for Children, who spoke of the values of a Bank Street education, including “combining gentleness with justice, striving to live democratically, and facing challenges with courage and grace for yourself and others.”

Next, Shael Polakow-Suransky, GSE ‘00, President of Bank Street College, appeared on camera to deliver welcoming remarks. He began with words about classic children’s book author Margaret Wise Brown, a founding member of the Bank Street Writers Lab in the 1930s who was recently featured in a New Yorker article that explored her life’s work and her connection to Bank Street. Polakow-Suransky spoke of Brown’s significance in the field of children’s literature and the role her children’s books play in his own home, reading an excerpt from Little Fur Family—his family’s favorite.

“Margaret Wise Brown teaches us that learning should be vital and engaging,” he said. “Learners need to be doing important work, taking real risks as they grow and develop. That spirit is alive and well at Bank Street today. We are reinventing children’s experience of school so that students are prepared to tackle inequality and creatively solve the problems of the future.” 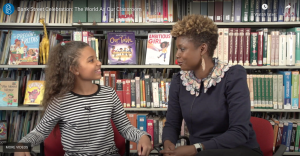 The virtual program continued with a short segment featuring Melle Powers, Principal at Powerful Communications, professional actress, and anti-racism practitioner, and her daughter Tallulah Brisiel, SFC ‘26. Tallulah discussed her participation in last summer’s Fish Pond Regatta, an event that invited children to build their own boats out of corrugated cardboard and test them out on the shores of North Adams, Massachusetts. This event is a real-life example of learning by doing—a hallmark of the Bank Street approach in which students take on roles as builders, creators, engineers, and more to understand the world around them.

Another part of the evening featured a glimpse into Bank Street’s work with public schools and districts through a conversation with Tarima Levine, GSE ’01, and Davia Brown-Franklyn, GSE ’97, of the Bank Street Education Center. Their work in the Education Center focuses on disrupting inequity through system-level change to help design better educational experiences for both children and adults.

“What we try to do is uncover and disrupt this ‘autopilot’ nature of being a teacher and a leader,” said Levine. “We want folks to feel comfortable in their routines and practices but we want them to be mindful and thoughtful about what they’re doing and why they’re doing it and the impact it can have on children and their colleagues and the community at large.”

Brown-Franklyn added, “For any change to be bold or be impactful, you have to think about it as a system, and conditions need to be set so that changes and improvements and ways to disrupt these inequities can happen in a holistic way.” 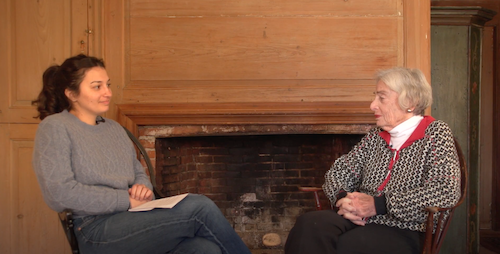 Up next was an interview with honoree Hillman, conducted by current Bank Street Graduate School student Heather Mohamed, who is slated to graduate next month. Mohamed asked Hillman about her life’s work, including the new business she started at the age of 92 called New Salem Cider. The farm in New Salem, Massachusetts offers the local community and visitors an opportunity to learn more about growing, processing, and harvesting food while appreciating land and nature.

Hillman also spoke of her connection to Bank Street. She fondly recalled the inspiring work of Bank Street founder Lucy Sprague Mitchell, noting, “It was her view to meet people of different cultures and get to know them, and through those experiences, students would gain a greater sense of empathy, caring, and a sense of community.”

When Mohamed asked Hillman of advice for a soon-to-be teacher, Hillman replied, “Be yourself and keep learning. Just remember, that’s part of being a teacher. Always be open to other ideas—sifting through them and deciding what is right for you—and always be open.” 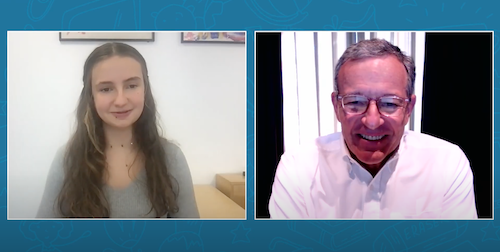 After hearing from Fern Khan, previous Dean of Bank Street’s former Division of Continuing Education, the program culminated in an interview with honoree Iger, led by his granddaughter and current School for Children eighth-grader Hayden Cushing. In a touching conversation, Cushing invited her grandfather to share more about his ties to Bank Street and what encouraged him to send his children (and grandchildren) to the School for Children.

“We had a very strong feeling that it would nurture them and help them become good people,” he responded. “Thank you to Bank Street for providing my children and grandchildren with such an enriching experience–not only educational, but enriching to them as people and in their lives. Bank Street occupies a special place in my heart and I imagine it always will.”

Bank Street’s Development and Alumni Relations Office was thrilled to report that the event amassed over $775,000 in donations, which will help the College continue to create meaningful change in the field of education and transform the lives of children, educators, and communities.

The School for Children will host a follow-up Bank Street Celebration event on Tuesday, June 7, which will include a cocktail reception at its 112th Street location, another viewing of the virtual program, and more small dinner parties hosted by Trustees.

If you were unable to attend the virtual event, watch a video recording