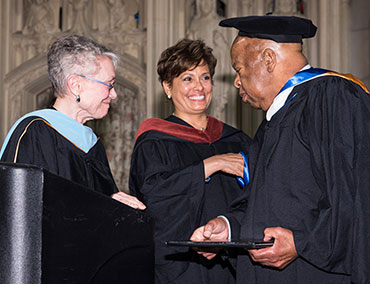 On Thursday, May 11, the Bank Street Graduate School of Education awarded U.S. Representative John Lewis the degree of Doctor of Humane Letters, Honoris Causa during its annual commencement ceremony at Riverside Church in New York City. After receiving his award, Congressman Lewis took the stage to deliver a powerful keynote address to the class of 2017 as they depart from Bank Street and enter the world as teachers, leaders, and practitioners.

During his speech, Congressman Lewis spoke of his experiences growing up in a poor family in rural Alabama and what inspired him to dedicate his life to challenging the injustices in our world. He urged the graduates to use what they’ve learned at Bank Street to do the same—to make a difference.

“I say to you, the class of 2017, that you must go out there, push and pull, and help make our country and our world a better place,” said Congressman Lewis. “When you see something that is not right, not fair, not just, you have an obligation, a mission, a mandate to stand up, to speak up, and speak out. We need you now more than ever before.”

The Bank Street community was proud to honor the courageous civil rights leader whose work, dedication, and passion deeply mirrors the College’s commitment to social justice. Dubbed one of the “Big Six” leaders of the civil rights movement, Lewis worked closely with Dr. Martin Luther King, Jr. to pioneer the use of non-violent direct action as a tool for social change. In 1961, he was one of the 13 original black and white Freedom Riders who fought segregation by sitting together on a Greyhound bus from Washington, DC to New Orleans. In 1965, he led marchers across the Edmund Pettus Bridge in Selma, Alabama in a protest that led to the passage of the Voting Rights Act, one of the most important accomplishments of the civil rights movement. Lewis has also served as Chairman of the Student Nonviolent Coordinating Committee and Director of the Voter Education Project, among other critical roles, and is currently U.S. Representative of Georgia’s Fifth Congressional District. 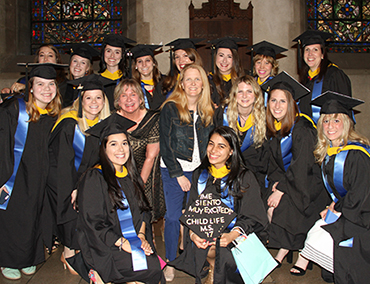 “He has lived his life with conviction and faith that the Beloved Community is ours for the making if we all roll up our sleeves together and get down to the hard work of building it,” said Cecelia Traugh, Dean of the Graduate School of Education, during the Conferral of the Honorary Degree. “He has broken the ground for us time and time again. He still believes the soil is good if we are only ready to join him in the making.” 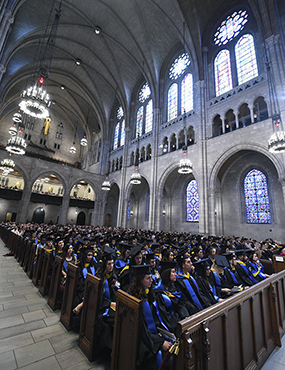 The class of 2017 also heard from a fellow classmate and Student Associate Trustee Rachel McEvoy, ’17, Chair of the Board of Trustees Yolanda Ferrell-Brown, and Bank Street President Shael Polakow-Suransky, GSE ’00.

“John Lewis inspires us to challenge injustice and to work to build meaningful social change,” said Suransky. “As we move forward today, I challenge you to seriously consider working in the communities across the city and country that desperately need strong and well-prepared educators. All children need learning environments that are rich with love and intellectual engagement, and you are uniquely equipped to help create those spaces.”