Building Safe Community Spaces for Immigrant Families, One Library at a Time

In today’s political climate, supporting the needs of young children from Latinx immigrant families has become increasingly difficult at the community, institutional, state, and federal levels. This essay is about a group of Latinx families who participated in an innovative early literacy program at a county public library branch in the migration setting of the U.S. Southeast known as the New Latino Diaspora (Hamann, Wortham, Murillo, 2015).  We describe the program and its role in building a safe and welcoming environment for Latinx students and their families. We include the voices of the librarian and parents who had never before participated in a family literacy series for Spanish-speaking immigrants. We conclude with a discussion about factors that foster an inclusive community space for educational experiences.

Creating Space Within the Public Commons

We, Denise, Max, and Silvia acknowledge the key role of the public library in building a healthy community (Cabello & Butler, 2017) as it tries to meet many of the needs of the individuals in the region (Morris, 2011). We view the library as a public common in which community members dwell in its communal spaces, share materials, and access a range of services (Didakis & Phillips, 2013). We agree with Cabello and Butler (2017) who argue that libraries can strengthen communities by connecting with individuals and families. As Latinx scholars of educational theory and practice, we collaborated with the main public library in our community of northern Georgia. With the support of the children’s library staff, we initiated a bilingual family literacy program to create an inviting atmosphere at the library in which immigrant families might choose to spend time.

In the process of developing our family literacy program, Cuentos para la familia (Stories for the Family), we took an architectural stance toward building a safe, home-like learning environment that involved both material components (e.g., bodies, tables, books) and expressive components (e.g., language, symbols, gestures, postures) (De Landa, 2006). To try and help the library feel like a home, we thought through possible additive interactions that could build experiences between families and the architectural space so that the library could become “an extension of the inhabitant, absorbing preferences, customs and rituals” (Heidegger, 1975 as cited by Didakis & Phillips, 2013, p. 308). Our objective was not simply to house a program for families but to foster an environment in which immigrant families might feel as though the library was an extension of their homes.

Dr. Max Vazquez Dominguez is an assistant professor of science at the University of North Georgia. He has worked in numerous science programs with middle school science teachers, TESOL teachers, emergent bilingual students and their families. He has also worked in Mexico training pre-service and in-service teachers in science in urban and rural regions. His research interests include using the emergent bilingual students’ interests and passions in the teaching/learning process, family involvement, science and soccer, the use of the space to enhance science learning, and bilingualism in education.

Denise Dávila is an Assistant Professor of Literacy and Children’s Literature at the University of Texas at Austin. Her research focuses on the inclusion of Latinx and diverse children’s literature in intergenerational, interdisciplinary, and community-based literacy programs for children and families. 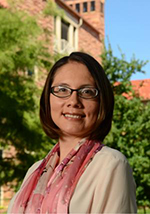 Silvia Noguerón-Liu is an Assistant Professor of Literacy Studies at the University of Colorado, Boulder. In her instruction and scholarship, Dr. Noguerón-Liu aims to create learning environments where teachers capitalize on the knowledge of culturally and linguistically diverse students. Her projects—conducted in traditional and new migration settings—document the affordances of digital resources for Latino families and the transnational funds of knowledge parents mobilize in literacy practices with young children.