Patriotic fever reigned supreme in my son’s fifth grade classroom in the public elementary school he had attended since kindergarten. It was in a middle-sized university town in the United States.

Framed photos of each student flouting the flag with patriotic pride announced his teacher’s curriculum and pedagogy. Mrs. ABZ’s message, at least as experienced by my son and me, was “Do or die!” You either subscribe to her patriotic philosophy of education, or you die as a legitimate and valued member of the class.

The school principal accepted that this was unpalatable, undemocratic, inappropriate, unjust and mis-educative—to say the least. But she lacked the power to control it. She thus offered the “best” third option: moving my son to the second elementary school she administered, a few blocks away.

“Unjust!” my confident son protested in moral outrage. “Why should I leave my school? I get good grades. The principal should require Mrs. ABZ to move instead.”

Unwilling to be frightened into silence, my son and I collaborated on a required homework project, drawing upon Loewen’s Lies My Teacher Told Me (1996) and Zinn’s A People’s History of the United States (1980). In response, ABZ screamed without restraint, viciously attacking our unpatriotic assignment. 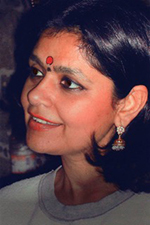 Madhu Suri Prakash is Professor Emerita at Penn State University. Her labors of love include: Friendship Garden through organic contagion; honoring wild diversity in living, teaching, and learning along the lines of Unitierra (Mexico), Bija Vidyapeeth, Bhoomi College (India), and Via Campesina universities; healing damaged multicultural rainbow coalitions across the earth; and transforming lawnscapes into foodscapes. She celebrates YES! Powerful Ideas, Practical Actions as contributing editor and the International Journal of Illich Studies as co-editor.