The Center for Children’s Literature at Bank Street College of Education is delighted to announce that Jerry Craft will be the 2020 Dorothy Carter Writer-in-Residence.

Jerry Craft is an award-winning author and illustrator who has created numerous picture books, graphic novels, and middle-grade novels. He is also known for his syndicated newspaper comic strip, Mama’s Boyz.

Jerry was born in Harlem and grew up in nearby Washington Heights. He is a graduate of The Fieldston School and received his BFA from the School of Visual Arts. Jerry will work in the School for Children’s 9/10s classes on creative writing in April 2020. 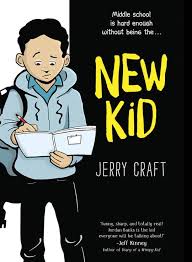 Dorothy Carter was Bank Street’s first African American faculty member, writer of highly acclaimed children’s books, chair of the Bank Street Writers Lab, and Broadway actress. We lost Dorothy in 2012, but continue to celebrate her contributions to children’s literature through the Writer-in-Residence program. Donate to the Writer-in-Residence fund

Watch the KidLit TV livestream of our 2019 BookFest to hear Jerry’s presentation on the “Graphic Novels and Comics as Information Texts” panel.  The panel begins at 4:52:26 and Jerry begins speaking at 4:54:50.