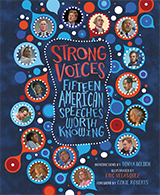 Strong Voices: Fifteen American Speeches Worth Knowing is a collection of speeches by various people. Before each speech there is an introduction by Tonya Bolden that talks about who the speaker was and what was happening for the topic of the speech at that time. The book’s beautiful illustrations are by Eric Velasquez. The book runs through history chronologically, from Patrick Henry’s “Give Me Liberty or Give Me Death” speech to Hillary Rodham Clinton’s “Women’s Rights are Human Rights” speech. Some famous speeches such as president Abraham Lincoln’s Gettysburg address and Dr. Martin Luther King Jr.’s “I Have a Dream” speech are included.

All the speeches have a theme, not the exact topic of the speech, but the broader idea it gives you. Two of these main themes are freedom and a person’s role in society. Examples of speeches that support the themes are like in Patrick Henry’s “Give Me Liberty or Give Me Death” speech. In it, he says that the American colonies should have freedom. Or in Frederick Douglas’ “What to a Slave is the Fourth of July” speech, he says that while whites celebrate on the day enslaved people grieved for that freedom. In Theodore Roosevelt’s “Citizenship in a Republic” speech, he says that the one person who goes into his or her community and tries to make it better is the one that should get the credit because therefore they are playing their role in society.

The theme that is much broader, and connects all of the speeches is in the last sentence of Lou Gehrig’s “Farewell to Baseball” speech. He says, “Even though I got a bad break I’ve got an awful lot to live for.” An example of a speech that supports this is in César Chávez’s address to the Commonwealth of California. He says that if we work for labor rights we will have a lot to live for in a just world.

Strong Voices: Fifteen American Speeches Worth Knowing is a truly wonderful book. It is a very powerful collection of speeches that will speak to the readers, and its illustrations are beautiful. In order to fully understand the full meaning and powerfulness of the speeches it is best if readers are ten and older”

Young people who are interested in reviewing are invited to do so as we welcome the individual perspective of our age appropriate readers. If you are interested in being a reviewer, contact bookcom@bankstreet.edu.